At the Carousel House in Fairmount Park, PA, the Magee Spokesmen are wheeling laps around the basketball court at the start of their weekly practice session.

After a few dozen circuits, they gather at one end. They begin start and stop drills, rolling out to the center of the court, stopping on a dime, executing hard 180-degree turns, and pushing back in the direction of the net.

Their coach, Eric Kreeb—who by day is a kitchen manager at Chickie’s and Pete’s—stands by and watches, smiling and shouting words of encouragement. Slide right, he shouts, turn and get on the line. The drills continue. Men push, turn, and then go from one end of the court to the other and then back…backwards. They pant, strain and sweat. 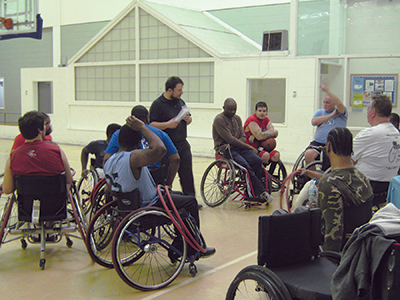 Back at the line, they’re huffing a bit now. “Turning left this time,” shouts Kreeb. His direction is met with some mild groans of protest. But the Spokesmen oblige, rolling out, turning left and rolling back. To some, it’s a competition. “Get your money!” one player shouts repeatedly. Forward and backward, turning wheelchairs left and right, drill after drill after drill. The practice is almost an hour old, and no one has yet touched a basketball.

Finally, they start shooting, taking turns at the foul line. As they shoot, two players practice defending one another, maneuvering a specially designed chair with an ability that clearly isn’t learned overnight.

The team splits into two groups and gathers at either end of the court. A scrimmage game begins. Wheelchairs clang into each other as players jockey for a position. Fast breaks happen, as do lay-ups, fadeaway baskets and rebounds. Players even occasionally fall out of their wheelchairs, but such incidents only briefly delay the action, and they are back up quickly.

One can only imagine the toll a whole game of this—or six whole games of this—would take on someone who isn’t built up for the battle.

“We prepare for our games at practice,” says Kreeb. “We do several stamina building drills, diagram plays, go over defense, and discuss strategies of attack against our upcoming opponents. The conditioning is particularly important because we play in tournaments. Most tournaments you play five to six games in two days.”

This is no playful, recreational diversion. It’s a real, honest team practice. It is the grueling, repetitive effort that athletes put in that makes their feats on game day look effortless. The Magee Spokesmen are professional athletes. It’s obvious by the way they miraculously avoid collisions and effortlessly land passes into teammates’ hands.

The words “wheelchair basketball” to most people probably bring to mind images of a few guys sitting around shooting baskets in an ultra-friendly lightweight competition. The idea of it being an international sport, with leagues, divisions, and tournaments, would likely come as a surprise.

The sport began in veterans’ hospitals shortly after World War II, as paralyzed war heroes adjusted to their new life. As the sport grew and teams emerged across the country, the National Wheelchair Basketball Association was formed. Today the NWBA has over 200 teams in 22 conferences, many of them sponsored by local NBA teams.

Internationally, since the formation of the International Wheelchair Basketball Federation (IWBF) in 1993, the sport has even more notoriety, particularly in places like France, Australia and Canada. Australia is the current IWBF men’s champion; Canada’s team took the women’s wheelchair basketball title this year. 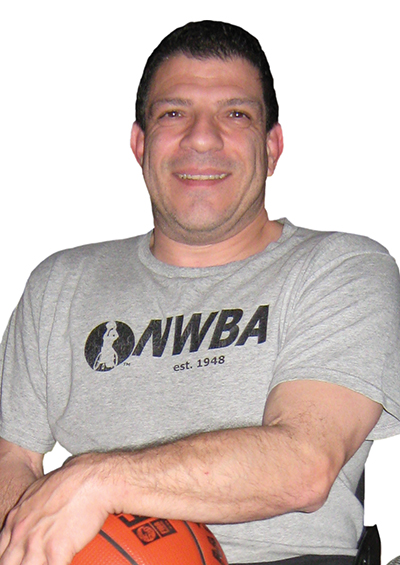 John DeAngelo, a player for the Spokesmen, took the time to educate me a bit about the sport. Born with a congenital affliction, he has been playing wheelchair basketball since the age of 12.

“The first thing, leaving basketball aside, is just getting used to a wheelchair,” he says. “It sounds easy, but maneuvering a wheelchair is not as easy as you might think. Before you learn anything else about ice hockey, if you can’t skate, you can’t do anything. The players who really excel, it’s like the chair is almost an extension of their body.

“Then you start to throw in the sport part, dribbling a basketball and learning how to shoot and maneuver around people that are trying to defend you. The mechanics are the same way; you just take the legs out of it. The upper body mechanics are the same. There are rule differences in wheelchair basketball that change things a little bit, but you still have to dribble.

“The thing that you start to notice, and that’s what everyone has to learn in practice, is that instead of just a body banging around, you’ll hear a little more metal crashing into each other. That’s when you know someone’s comfortable with it, whereas there are guys that are very apprehensive about smashing into something.

“They’re the rookies!” DeAngelo says with a laugh.

The NWBA, NBA and NCAA are more similar than they are different.

The rules are the same as in the NBA; court dimensions and basket height are the same. There are some rule differences; traveling in wheelchair basketball consists of touching one’s wheels twice after dribbling the ball. There is no double dribble rule, as DeAngelo notes: “That allows you more maneuverability, so you’re not constantly dribbling, or else you really wouldn’t go. Some people can do that really well, but this allows you to maneuver faster and keep the pace going.”

Another difference is that with the nature of wheelchair basketball being such that teams can’t trade players or acquire free agents, players generally play for the team where they live. The best teams become the teams that retain the same players long enough to gel.

“In any team sport,” DeAngelo says, “the longer you keep a nucleus together, the better that team is going to wind up being. We’ve played against teams constantly who’ve grown; a lot of the players were not that good and all of a sudden they start to gel and get better. Year after year you see them grow and they become a powerhouse. North Carolina had always been a good team, and last year was finally their year where they just clicked.”

The NWBA has seven divisions, ranked by the level of competition. The Magee Spokesmen play in Division III, where DeAngelo says most teams are. Division II, he says, is an entirely different animal.

“You have teams out there who are competitive, you have teams with players that are just out there playing, and that’s great. They love to play, they know they’re not that good but they’ll travel to a couple of tournaments and just play. It’s not all about trying to win a championship to them.

“The more competitive you get, yeah, it gets dangerous,” he says.

Yes, DeAngelo has sustained some injuries in his career. In that regard as well, wheelchair basketball is no different from NBA basketball.

“I was playing this past weekend down in Virginia Beach, going for a rebound, another guy’s coming from the other team and wham! We just smashed into each other. I took the brunt of it, I’m not the biggest guy, and I just tumbled to the ground.

“It sounds bad, sometimes it’s bad, but it’s just part of the sport. You’ve got metal on metal, you get run over sometimes, fingers get jammed in wheels, things like that absolutely happen. I’ve had broken fingers, broken arm, several concussions, it’s pretty brutal.”

Today there are over 100,000 wheelchair basketball players worldwide. Most, like DeAngelo, play in organized leagues with tournaments and championships. Some play for national and international titles, which DeAngelo has also done. And the growth of the sport has created a competitive outlet for those at every level who see themselves not as disabled, but as athletes who do things differently.

DeAngelo has represented Team USA, but he’s also happy to have been part of a growing competitive sport.

“Putting on a USA jersey and playing overseas was probably the biggest thing. I did get a chance to play in two national championships for Temple. But for me, the thing I’m most proud about is that there are more programs now for younger kids, so when they’re starting out there’s something structured.

“I was 12 playing with 30-something year-old guys. I had to learn a lot of stuff really quick. Now there’s so much out there, and basketball was a stepping stone for a lot of other things. There are so many sports now for wheelchair athletes that it’s mind boggling.

“It’s a great thing to keep in shape. You slow down a bit like with anything, but the one good thing is that you can be a competitive player no matter what your age is, as long as your body can take it.”

And wheelchair basketball players will get run over, fall out of their chairs, get their fingers jammed in wheels and endure broken arms and concussions, and get back in the game for as long as their bodies can take it.

It’s what athletes do.