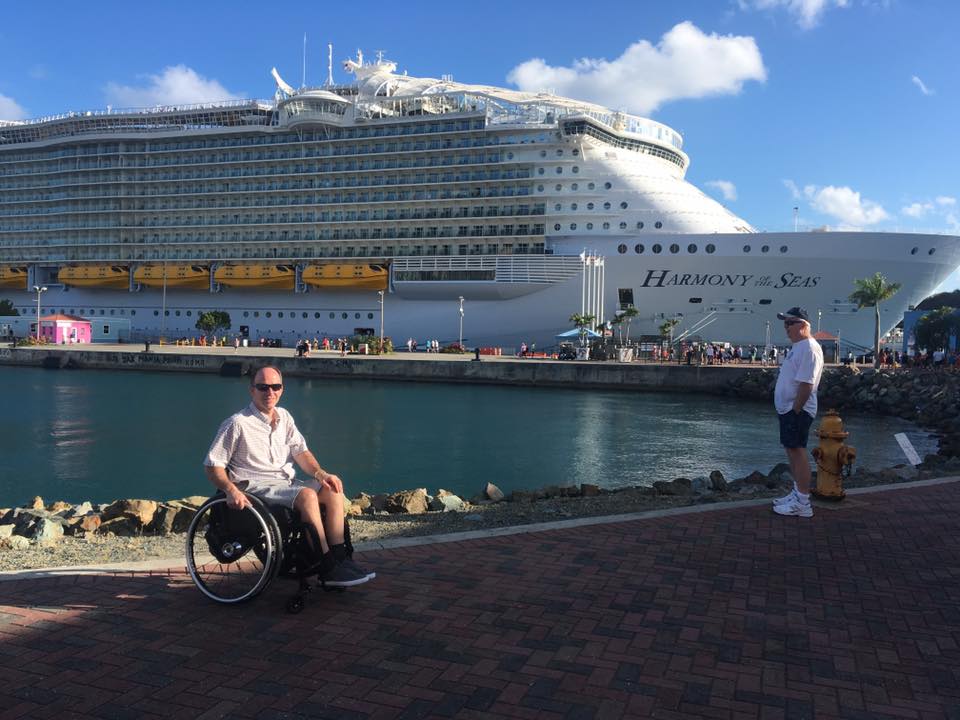 If you’ve read my blog posts in the past, you know that I love to travel and also that cruising is my favorite type of trip. I have provided tips in the past (like booking early) but now I give you what I believe can be the most important ingredient for a successful cruise: bigger and newer is better when it comes to access for those of us with disabilities.

In February 2016 I was happy to get away and go anywhere after having spent a bunch of time in the hospital in 2014 and then time recovering in 2015. I went away for a week on a smaller, older ship, with low expectations, and they were met. While on that cruise, I learned about a new ship that was being introduced later that year by Royal Caribbean called Harmony of the Seas. It would be the biggest cruise ship in the world with all of the newest and coolest stuff, plus the ability to hold more than 6,000 passengers.

The most important thing for me was to be able to book a wheelchair accessible room with a balcony. On older ships, my room was usually down low in the boat. If I was lucky, I was able to have a window to look out of instead of just a little porthole. The thought of having a balcony on Deck 14 that I could manage myself was really exciting, so I booked it and the countdown began.

As the trip got closer, I realized this was different than any cruise I had ever been on before. I was able to make dinner reservations with “My Time Dining” and pick a time that I wanted. I reserved shows ahead of time, and there was no shortage of choices. As excited as I was, I also wondered, with a ship this big and 6,000+ other people on it, was it going to be over-crowded? Was I going to be waiting in lines for the elevator, to eat, or to do anything? 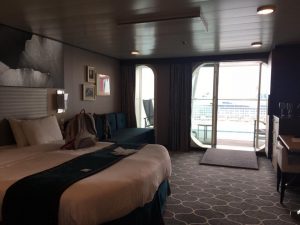 My room and balcony

Well, I must tell you: from start to finish this was by far the most amazing cruise I have ever been on! Less than 20 minutes went by from the time I got out of the cab, checked in, and in my room. Usually, the bathroom is the first thing I look at in any hotel room, but this was different. I saw the door, the ramp, and WOW: a balcony that was truly wheelchair accessible. Everything was new in the room, it had a bathroom and shower that would work, and that year of anticipation was worth it.

My experience as a wheelchair user the rest of the week was just as good as that minute I first entered the room. There was more accessible seating for the shows, and yes, you had to get there early to be sure you had a good seat, but that’s no different for able bodied people. The elevators were big and fast. The restaurants were easy to navigate, and the casino actually had seats that move, so rather than being limited to the end machines, I could play wherever I wanted.

The only bad part about the cruise was that it ended seven days later. But, before leaving the ship, I already scheduled to sail on her sister ship next February. As in any part of life, if you find something that works, stick with it!

(I should state that I do not work for any cruise line, and my experience here isn’t to promote any particular one. It’s merely to help you have a good time on vacation!)

The ‘Rockin Doc’ Rocks for Magee
Read More
Back to all blog
Loading Comments...