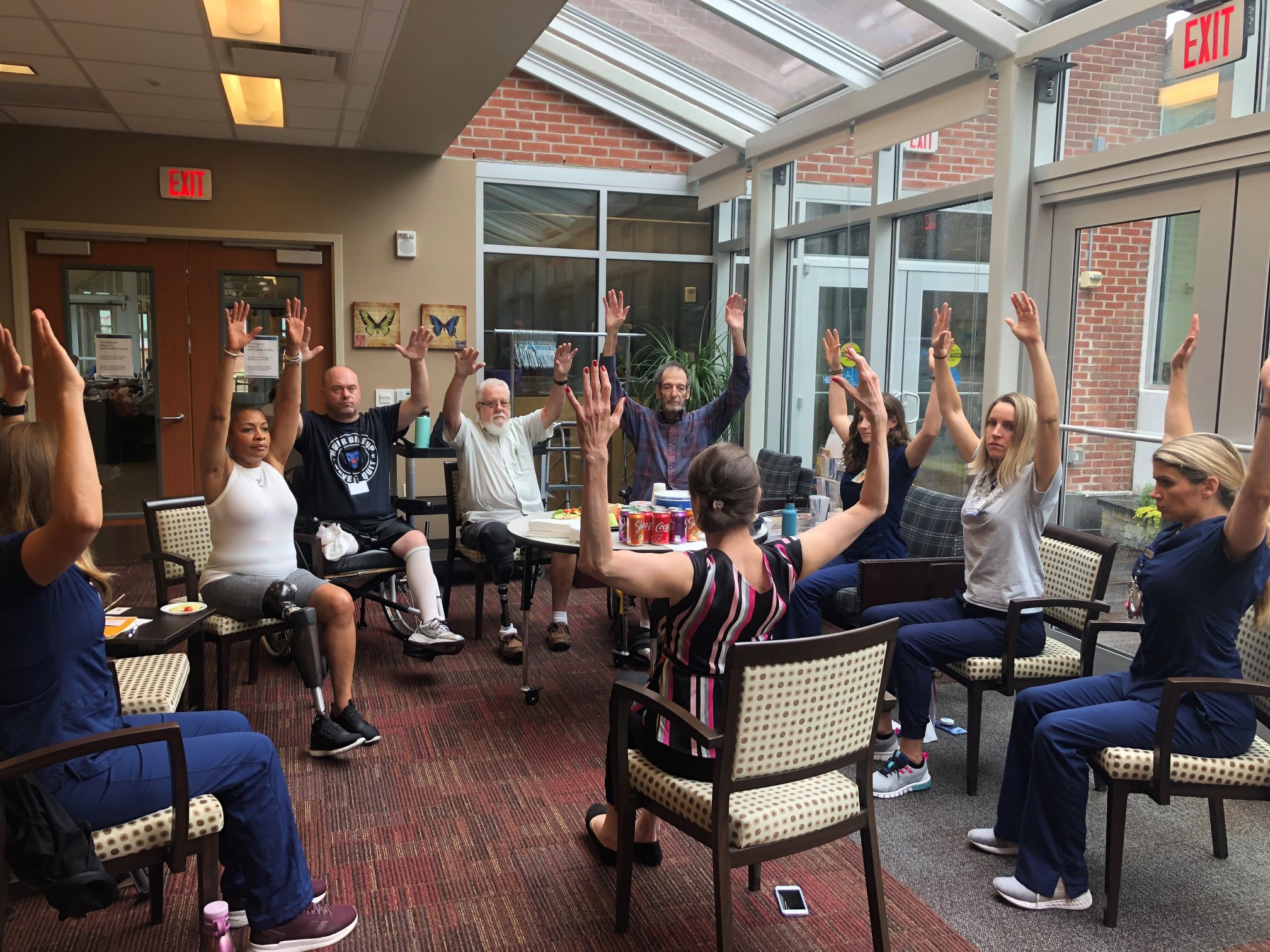 “Wholeness is not simply having four limbs.  Wholeness is knowing that you are complete within yourself, just as you are.”  — Marsha Therese Danzig, yoga instructor and founder of Yoga for Amputees 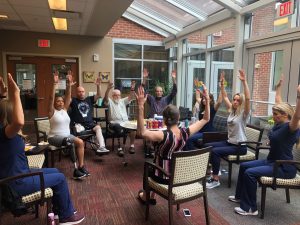 If you peeked into Magee’s 6th floor Spirituality Center recently, you might have seen a circle of people with their eyes closed, spines extended, and arms raised.  Some held the backs of chairs for balance while others stood unassisted.  A few sat, breathing deeply, in their wheelchairs.

If you’ve been to a yoga class, this scene probably looked familiar – at first glance.  But if you zoomed in closer, you might have noticed something different:  the people in this group were missing limbs.

This was a yoga workshop, specifically designed for Magee’s Amputee Support Group.

Participants included amputees from the community, current patients with amputations, as well as several Magee therapists.  This summer, the group’s meetings have focused on mindfulness, including a meditation workshop with Magee’s music therapist John Glaubitz in July. 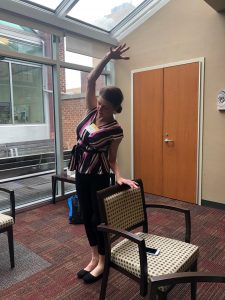 The yoga workshop was conducted by Marsha Therese Danzig, a below-knee amputee and founder of Yoga for Amputees.  Danzig, a longtime yoga educator who has struggled with many health issues herself, believes that yoga can help amputees rediscover and reclaim their wholeness.

She began the workshop by explaining the benefits of yoga, particularly for amputees.  “Yoga enables you to be playful and curious about what your body can do,” she said, “rather than what it can’t.”  It helps you connect to something bigger and think differently.  For example, “How does amputation expand your world instead of contract it?”

Danzig emphasized the flexibility and adaptations inherent in yoga practice.  “A comfortable position means different things to different people,” she told the group.  Assistive devices like crutches and canes can be used as props, along with walls, chairs, and other available items.  Yoga can be done with or without a prosthetic, and with or without shoes.  It’s about figuring out what works best for an individual’s own body and mind. 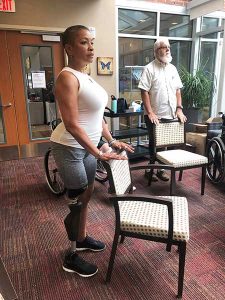 In addition to the physical components, Danzig pointed out, there are spiritual and emotional benefits.  “Stillness allows you to connect to places and things that need to be healed,” she said, such as memories and trauma.

Janelle Roundtree-McDonald, an above-knee amputee and support group member, attended the workshop.  Janelle practices yoga regularly at home.  “It has just been a year for me [since amputation],” she said, “but yoga has been so beneficial to me on so many levels.”  She said that deep breathing, especially, helps her relax.

Danzig lead the group through a short sequence called Six Movements of the Spine.  With each gentle instruction, she offered modifications so group members could adapt the positions to their bodies, comfort, and skill levels.  Next she transitioned the group into a quiet meditation.  She called this “the sponge part,” in which you take in everything you just did and “digest your yoga.”

“Yoga is a healing practice that makes life better for amputees, especially as they grapple with prosthetics, body image, pain, freedom of movement, and other residual effects of limb loss,” writes Danzig, in her book, Yoga for Amputees. 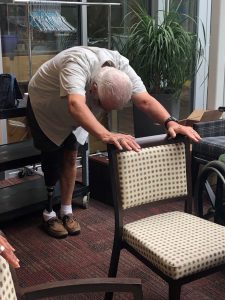 Jim Lanahan, a below-knee amputee and Magee peer mentor, participated in the workshop.  Afterward, he said, “As an amputee, I have found it difficult to maintain my flexibility and core strength.  I had never thought of yoga as a way of addressing this.  During this workshop it became obvious that yoga can be adapted for my particular needs.  With just the relatively short exercises that Marsha led us through, I could feel a positive impact.  The fact that yoga incorporates a contemplative, meditative approach adds another helpful dimension.”

Marsha Therese Danzig conducts yoga workshops, as well as online and in-person classes.  She also provides training for PTs, OTs, and other medical practitioners interested in using yoga with their patients.  For more information, visit her website https://www.yogaforamputees.com/

Magee’s Amputee Support Group meets the 2nd Tuesday of each month from 12:15-1:00 PM on the 6th floor of Magee Rehabilitation Hospital.