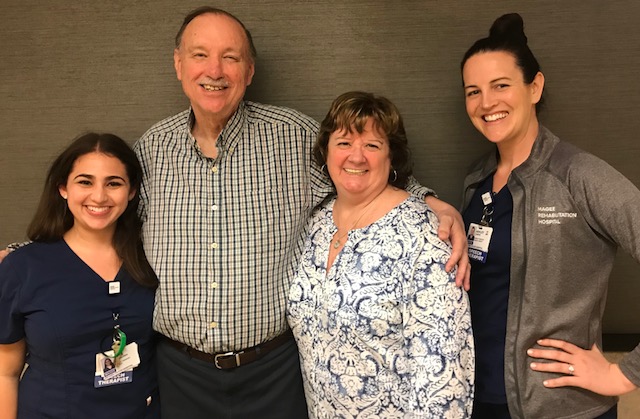 Every morning before heading off to work, I make a cup of coffee that I sip on the train as I head into work. I grab breakfast in the cafeteria before going up to my office to start my day. I drink water throughout the day to quench my thirst. As human beings, we eat and drink all day long, and the process comes naturally and without second thought. Eating and drinking is not only a process that keeps us alive and fuels our body, but it is also something that brings with it excitement, pleasure, and a means of socialization. Swallowing is an ability we are born with that is usually taken for granted until it is lost.  For those living with a condition called dysphagia, eating and drinking can be a daily struggle that can cause physical, emotional, and psychological changes to a person’s life.

June is National Dysphagia Awareness month. Never heard of dysphagia?  That’s because it is often referred to as the ‘silent epidemic.’ Dysphagia, or difficulty swallowing, is a serious medical condition that affects 1 in 25 Americans annually and can have life altering and serious consequences.

Dysphagia is a disorder that is associated with a wide variety of conditions including stroke, traumatic brain injury (TBI),  head and neck cancers, and neurologic disorders such as dementia, ALS, and Parkinson’s to name a few. Complications of dysphagia can include aspiration pneumonia, malnutrition, and dehydration. Believe it or not, approximately 60,000 Americans die annually from complications associated with dysphagia. Those living with the condition report feelings of isolation and depression as they are not able to socialize in the same way they used to.

Today, I want to introduce you to Tom Carpenter. Tom was a patient of mine who completed inpatient rehab at Magee in 2017 and went on to complete outpatient therapy at our Riverfront facility. He was recovering from his second hemorrhagic stroke resulting from a cavernous malformation that he was born with. Tom’s stroke affected his brainstem, an area of the brain responsible for swallowing and basic life sustaining functions (i.e. heart rate, breathing.) While at Magee, Tom worked very hard in speech therapy to improve his swallowing, speech, and voice.

Ashley Owens (AO): Tell us a little bit about yourself.

Tom Carpenter (TC):  I live in Toms River, NJ with my wife Pat. We are blessed with five children and five grandchildren.  I’m a former physical education teacher, athletic director, and coach. I’ve always been very athletic and coached three sports throughout my career. I was most known for coaching high school basketball. In my free time, I like to spend time with my family and go boating when the weather is nice.

AO: Why did you choose Magee for your rehab?

TC:  When I had my first stroke years ago, my wife and I had chosen Magee for rehab after hearing that it was one of the best. After completing my therapy here back then, I thought the word of this place. The therapists and staff here had helped give me my life back. After my most recent, second stroke in 2017, I knew I wouldn’t come anywhere else. Everyone’s philosophy, right down to the cooks in the cafeteria, is to go above and beyond. All of the staff here are warm, welcoming, and made me feel at ease. It’s almost like I want to live here again!

AO: Tell us about your typical day at Magee.

TC:  In the morning I had to get up early; I felt like I was in the military. All the nursing assistants would come in to help me get dressed, but I was the kind of person that wanted to do it myself.  I didn’t want people doing things for me and wanted to give it my best effort. I was used to always being independent and a go-getter; it’s the coach in me!  In the beginning many tasks were hard, but the more I had myself try to do them, the more I accomplished and the stronger I got. I worked hard in speech, occupational, and physical therapy for an hour each day and made progress each week I was here which was nice to see.

AO: What goals did you achieve here?

TC: My biggest goal was trying to be as self-sufficient as possible. I wanted to be able to walk out of here with a walker and not a wheelchair, and I did just that by the time I left.  My swallowing improved a little more slowly (and is still improving), but got better over time. I worked on a lot of exercises to strengthen up the muscles in my throat that control swallowing. I was very scared in the beginning that I wasn’t going to be able to eat any of my favorite foods ever again. Little by little my throat muscles got stronger and by the time I left I could start experimenting with eating certain foods under the supervision of my speech therapist. My swallowing has improved greatly but is still an area I struggle with. I can eat certain types of foods and drink liquids now but get tired during meals since swallowing requires more effort than it used to. I don’t feel comfortable going out to eat in public yet and continue to get some of my nutrition and hydration through a feeding tube that was placed right after I had my stroke. I’m hoping to get this tube out in the near future as I continue to make improvements!

AO: What advice would you give to someone going through recovery?

TC:  You have to have a reason to get better. And if you don’t have a reason, just say to yourself, “I’m here for a reason; I need to be something good for someone else.” My motivation to get better was my wife, family, and kids. They were here for me through everything and that meant a lot to me.  Another thing I learned was that you have to try to force yourself to do the things that are hard, even though it might take effort and time. If you can’t do it the first time, keep trying. Lastly, I would say try to have a sense of humor because not every day is going to be a good day, and you have to blow it off sometimes.  Keep being a fighter!