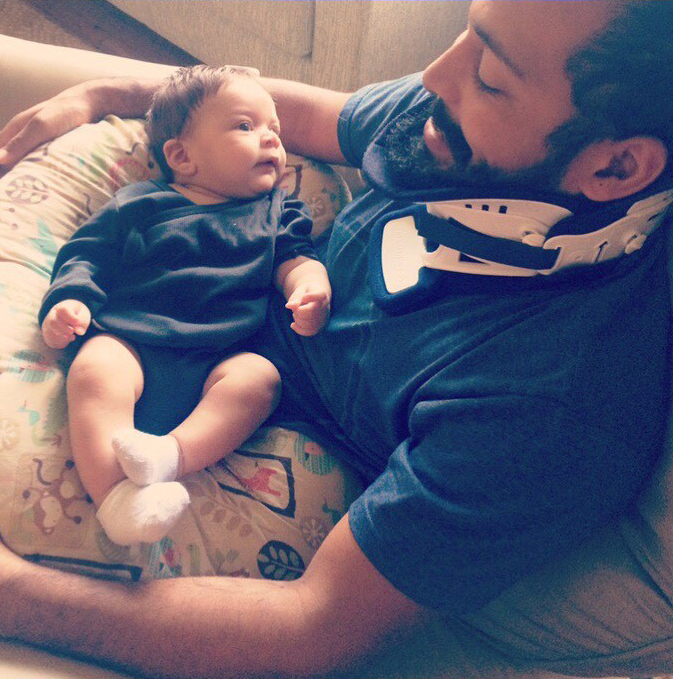 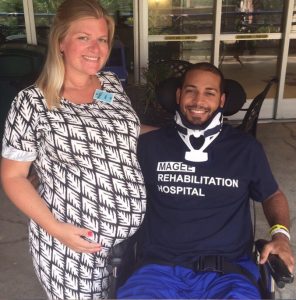 Halley and Teudy before Charlie was born

For 29-year-old Teudy Martinez, July 24, 2016 started out like any other day on the beach. He was hanging out with friends in Brigantine, NJ when he dove into the ocean to cool off. But he hit a sand bar and broke his neck at the C6 level. At the time, Teudy’s wife Halley was nine months pregnant with their second son.

“I knew right away something was wrong,” Teudy says. “Everything went numb, but I never lost consciousness. I was with it the whole time.”

He was taken to AtlantiCare for surgery for his incomplete spinal cord injury. Five days later, Teudy was transferred to Magee.

“At first, I was planning to go to rehab closer to home in Ocean City, but we changed our mind at the last minute and came to Magee. I’m so happy we did,” Teudy says. “We started researching and thought, ‘If we’re gonna go through this, we might as well go to the best.’”

Halley took care of their older son Maxwell, now 4, at home at the shore, while Teudy worked on his recovery at Magee.

“Rehab was rough!” Teudy says. “But my physical therapist, Chris [Carroll] was awesome. He really encouraged me to try new things, and 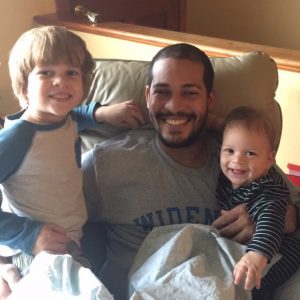 he made it fun to do therapy.”

Just two weeks after Teudy arrived at Magee, his second son was born. Baby Charlie arrived on August 16, 2016. Thanks to FaceTime, Halley and Teudy could see each other virtually, shortly after delivery. She had a C-section, so she couldn’t drive to Magee right away. Teudy finally met his son Charlie about two weeks after he was born.

“Friends and family have been so helpful,” Teudy says. He reunited with his wife and sons at home in October. He now uses a manual wheelchair for mobility.

“I love to go out and play with my boys,” Teudy says. “With my older son, we’ll race or play tag. The baby climbs up on my chair because he’s all 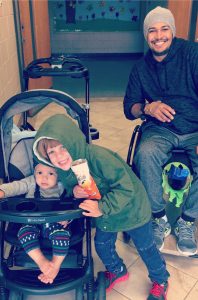 over the place now, pulling up on anything he can get his hands on!”

Before his injury, Teudy worked as an electrician, so he’s now connected with New Jersey Division of Vocational Rehabilitation Services in Cape May County to plan where his career could go next.

“My kids and wife are what keep me in check,” Teudy says.
To learn more about the Spinal Cord Injury Program at Magee, click here.