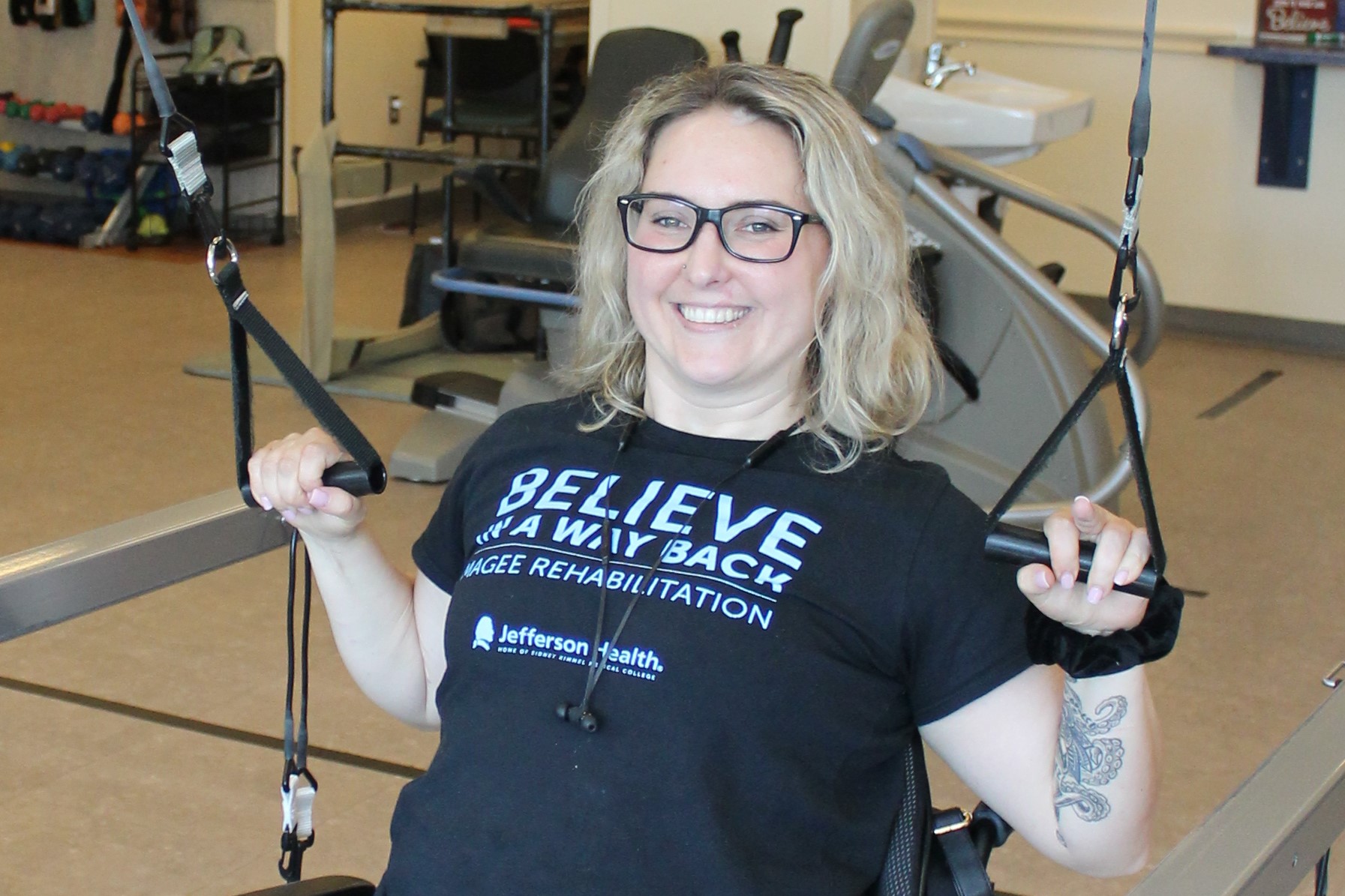 Finding Her Strength in the Darkest Moments

Posted by Alexandra.Hackett@jefferson.edu on December 2, 2019 | No Comments » » 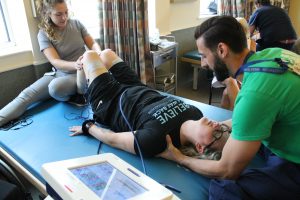 Nikki Walsh wasted no time getting herself from the wheelchair and onto the cushioned physical therapy table at the Magee Riverfront outpatient facility on a late summer afternoon. The 29-year old woman laid flat on her back with her knees propped up, as physical therapist Andrew Stamatelos and physical therapy aide Kerry King strategically applied electrodes on her lower body. They were using the XCITE functional electronic stimulation machine to engage her quads, hamstrings, glutes and hip muscles. Nikki knows every session at outpatient physical therapy is another opportunity to get stronger.

“From where I was in inpatient and where I am now, I just honestly never thought I’d get to this point,” Nikki said. “My strength in general has improved. My independence has shot through the roof,” she added.

“We Just Wanted the Best for Her”

It had been one year since the accident that turned her life upside down. In August 2018, Nikki was driving north on I-476, about three miles from the Lansdale exit, when her car struck another vehicle that was driving without its lights on. 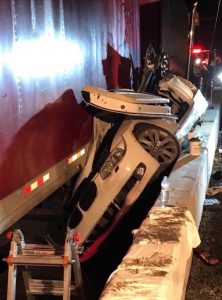 “I called 911 because my car was disabled. It wouldn’t drive off to the shoulder. The operator told me to stay in the car and put my flashers on,” Nikki recalled. “I was going to call my parents and I remember looking in my rear-view mirror and thinking, ‘Please stop. Please stop.’ That’s all I remember until I woke up laying in the back seat of my car. I was screaming to get me out.”

When she woke up again a few days later at Thomas Jefferson University Hospital, Nikki learned she had been rear-ended by an SUV driving at full-speed, which pushed her car into a tractor trailer. The crash left her with a T2 incomplete spinal cord injury, six broken ribs, a collapsed lung, and lacerations to her head, face and hands. Doctors performed two surgeries on her spine and Nikki underwent intense respiratory therapy. Two weeks later, she came to Magee for acute rehabilitation. Her mom says it was never a question of going anywhere else.

“We just wanted the best for her,” said Donna Walsh, Nikki’s mother. “She was healthy and active. For her to just be laying there and I couldn’t do anything, it just broke my heart.” 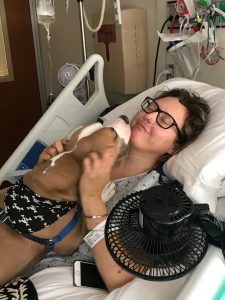 Nikki is comforted by her dog, Kato, during her recovery in the ICU.

The family would come to learn that rehabilitation and recovery following a spinal cord injury is long and arduous. It was on her first day at Magee that Nikki saw herself in a mirror for the first time since the accident. She didn’t recognize the person in the reflection.

“I had scars all over my face. I was in a brace now. I was in so much pain. I just broke down in tears, because my entire life just changed in a matter of seconds. I had no control over it,” she said. “It made me realize how much I took for granted before. I couldn’t turn on the faucet by myself without bracing. I could barely brush my teeth. Brushing my hair was hard. I constantly had to be holding on to something since I didn’t have any balance.”

Nevertheless, when physical therapist Stephanie Zaleski asked her on that first day if she wanted to try to stand, Nikki didn’t hesitate.

“We had two of the therapists in front of me and I pushed off from their shoulders,” said Nikki. “I forgot how tall I was. I hadn’t been vertical in three weeks. That was great.”

Over the next two months during her inpatient stay at Magee, Nikki underwent intense physical and occupational therapy to stimulate the nerves and muscles in her limbs, build her strength and learn how to live in her new body. This meant learning tasks such as how to get herself in and out of bed, putting on shoes, walking her dog, and getting herself off the floor if she were to fall out of the wheelchair.

“She is a very strong person. She will fight through anything,” Zaleski said. “She has been determined since day one.”

The physical challenges seemed almost insurmountable at times, though, under the emotional weight of depression. Prior to the accident, Nikki worked as a bartender and part-time personal trainer, and was saving up to move to the West Coast. Now, she was coming to terms with adapting to the new direction of her life. 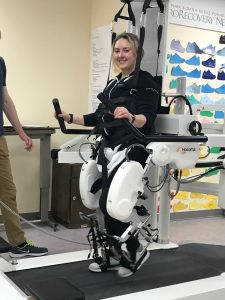 Walking with assistance of the locomat machine during a therapy session.

“I remember everything being so hard and thinking I’m never going to be able to do this,” recalled Nikki, who said counseling and medication for depression have helped tremendously. “Your mental health is so important, especially when you’re going through a tragedy like this. No one should be embarrassed to say that.”

Focused on the Future

Nikki transitioned to outpatient therapy at the Magee Riverfront in the fall of 2018, working closely with physical therapist Andrew Stamatelos. During their weekly sessions they use various equipment and techniques to work on her posture and core, build strength in her trunk and legs, and wake up the nerves in her lower body. Besides her regular outpatient sessions, she also exercises at the Riverfront Wellness Center and at home.

“I love coming here,” Nikki said. “They motivate you and make you feel better about yourself.”

“She has come a really long way physically with her mobility and function and mentally she is in much better place,” Andrew said. 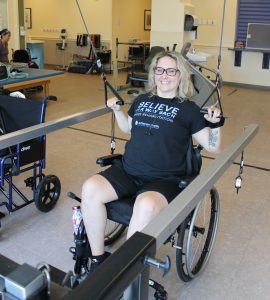 Nikki lives with her mom and dad in the house where she grew up in Souderton, Pennsylvania. They turned the living room into Nikki’s bedroom and renovated a bathroom to accommodate her needs. They also added a wheelchair ramp and a stair lift. In addition to the gains in strength and increased independence, Nikki has started to get feeling back in her torso and hips. She can also voluntarily move muscles in her abdomen. She has set her sights on driving lessons and getting an adapted car in the new year. A tattoo of an octopus around a lotus flower on her left forearm serves as a constant reminder of her strength and resiliency.  Nikki explains, “You see, when an octopus loses a tentacle, it is possesses the rare ability to regrow a new tentacle. The lotus represents rebirth and self-generation.” The symbolism always puts a smile on her face.

“For me, it’s about regrowth and coming out of a dark place. Getting better and re-growing,” she said. “It’s a reminder, you can do it.”