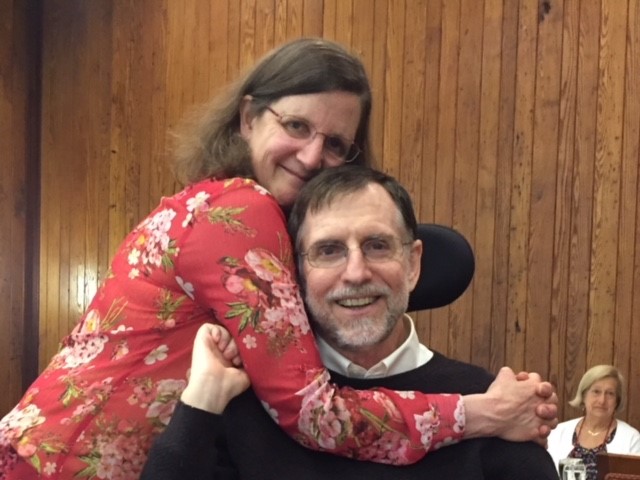 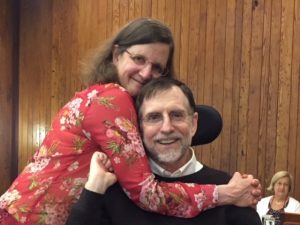 Steve Goodell and his wife Laurel

“If I wasn’t working, I was almost always outside doing something: hiking, biking, running, kayaking,” Steve, of Lawrenceville, NJ, says.

In October of 2016, Steve was a bicycle racer, competing throughout the tri-state area.

Steve, then 58, was on a training ride one Saturday morning with about 20 friends and teammates. Fifty miles was their typical distance. The group was riding in tight formation when Steve’s accident occurred.

“Something happened; we don’t know what, and I flipped over my handlebars and fell on my head,” Steve recalls. “I never really lost consciousness through any of it.”

Thankfully, one of the cyclists in the group, Robin Wahl, was also a paramedic.

“I owe everything to her,” Steve says. “She jumped in and took over, and she made sure no one moved me.”

Steve was airlifted to Cooper Hospital where he spent two weeks in the intensive care unit. On a ventilator and feeding tube, he transferred to Magee for inpatient rehabilitation. He suffered a spinal cord injury.

Rehab was incredibly difficult. Steve wasn’t sleeping and couldn’t swallow. He was still getting used to his new body.

“My spinal cord injury is at C5, but I present more like a C7 based on my ability to move my biceps and triceps,” Steve says. “I’m lucky.”

“For me, the importance of rehab was not learning to do specific things. I was not going to learn to walk again. It was more about introducing me to a new way to look at things, a new attitude,” Steve says. He uses a power wheelchair for mobility.

“The tremendously positive energy that my care team brought to everything: it’s effective and infectious.”

Milestones like the removal of his trach tube were momentous. But it was still difficult for Steve to picture what life back home would look like. Going back to work seemed even more unattainable.

A fellow attorney and cyclist, who happened to be on the ride when Steve was injured, stopped by for a visit. He encouraged Steve to consider practicing law again, when he was ready.

“He tapped his head and said, ‘You’re a lawyer; use your brain. You’ve still got a brain,’” Steve recalls. “He was right. I’ve still got the tools to do what I need to do, and I’m fortunate that way.”

Steve was asked to serve on a panel on which he had worked in years past. The panel would convene in the fall of 2017, which gave Steve a goal to work toward. Knowing that his colleagues had confidence in his ability to return to work gave Steve the motivation to do just that.

Before his injury, Steve had a small law firm of three partners. He folded that firm and merged into a larger one called Parker McCay, allowing him to maintain his practice in a new way.

“One of the things I’ve had to do differently is learn to rely on other people,” Steve says.

His wife Laurel is his caregiver and also a college lecturer. They have two adult daughters who live a couple hours away, and they try to spend as much time together as possible. They like to go out to dinner with friends, see movies, and enjoy the outdoors.

“I’m so grateful that I have this support, and I know not everybody does,” Steve says. “Without that support I would not be this story. It would be much different.”