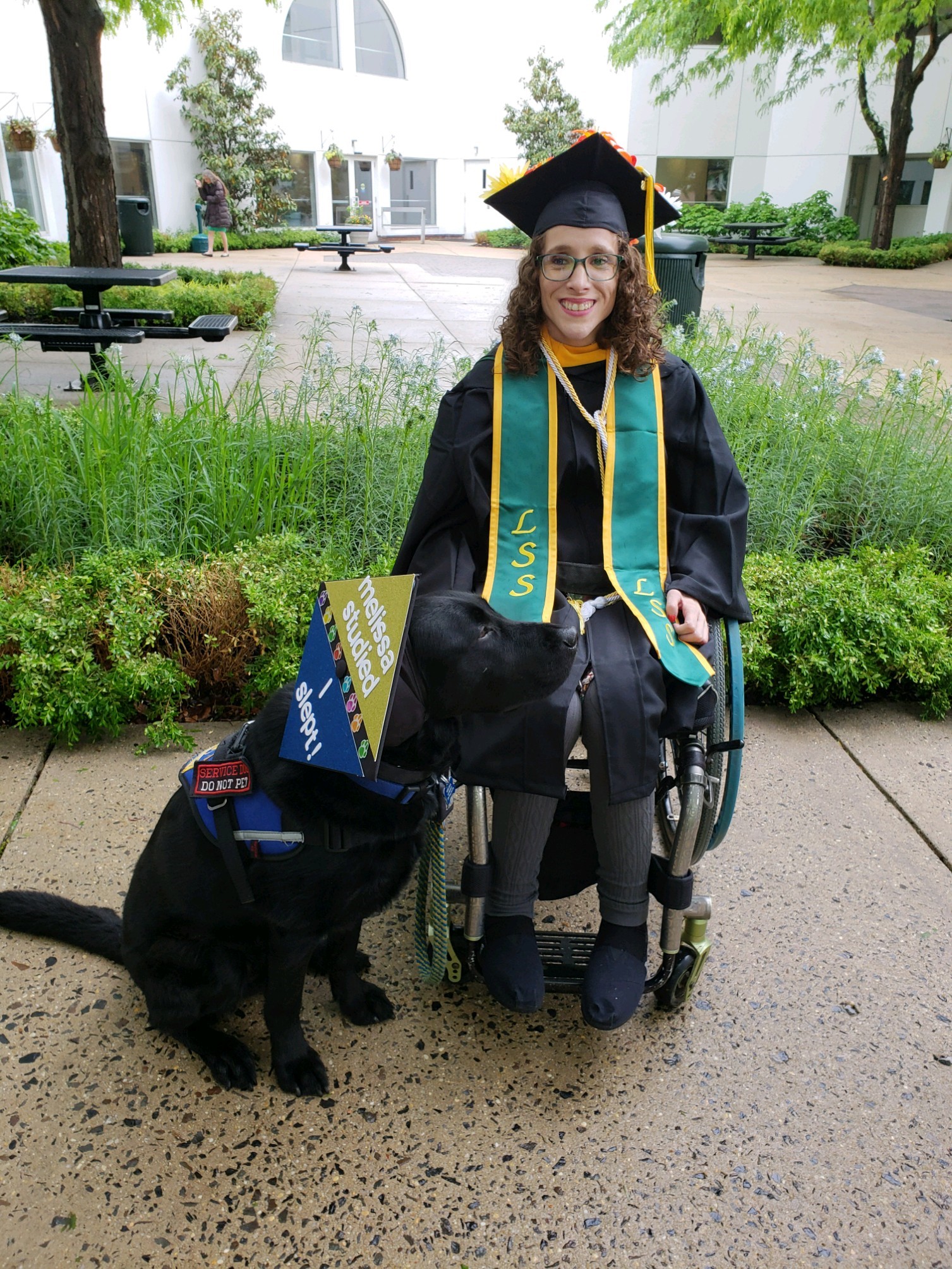 This summer marked 10 years since former patient Melissa Nunn sustained a spinal cord injury at age 16. Today on the blog, she reflects on life since her injury, including being matched with a service dog, trying new sports, and graduating from college.

On August 8, 2008 I was 16 years old and on vacation with my family in Hawaii. We went to Kipus Falls, popular among the locals. I jumped off the waterfall and climbed back up to go again. As I was standing on the edge, I went to push off, but my foot slipped, sending me into the water head first. The next thing I remember was opening my eyes under water. I could tell something was wrong and knew I had to get my head above water. After my sister and cousin swam over to me, they were able to get me to land. At that time, an orthopedic doctor who happened to be on vacation came over and stabilized my neck and assessed my injuries while waiting for the ambulance. Initially, I was taken to a local hospital where they put staples in my head. I was then flown to Oahu where the trauma center is located. After a series of tests, I was told by doctors that I had broken my neck at C6 and C7, which made me lose all or partial movement in all four of my limbs. Within hours, I was taken into surgery for a spinal fusion. When I came out, I was on a ventilator and had a chest tube. After I was stable enough, I was flown to Thomas Jefferson University Hospital in Philadelphia. Although I was no longer on a ventilator, I was on a trach to help me breathe. After two weeks, I was transferred to Magee Rehabilitation Hospital.

When I first got to Magee, I was scared because I didn’t know what was ahead of me. As soon as I met my occupational therapist, physical therapist, and other staff, that fear went away. I spent the next four months relearning how to do every aspect of my life, like getting dressed and writing, plus learning new skills like transfers and wheelchair mobility. During my time at Magee, I was supposed to be in my sophomore year in high school. The Adolescent Counselors at Magee provided a teacher that kept me on track with my classes. Even though my life had taken a different turn, it was important to me to stay on track with school so that I didn’t fall behind. On January 16, 2009, I was sent home from Magee and continued to do Day Rehab for the next few months. Then I transitioned to outpatient rehab for the duration of my high school years.

By the time September 2009 came around, I was ready to go back to school for my junior year. During that time, I faced many difficulties—from my endurance to just simply getting from class to class. One thing I discovered was that people weren’t afraid to talk to me, but they didn’t know what to say. The more I showed my peers that I was comfortable with my situation, the less hesitant they were to approach me. My senior year marked a turning point for me both medically and personally. I thrived in my classes and started to become the person I am today. The highlight of my senior year came when it was time to pick senior superlatives. I decided I wanted to win “Best Legs.” With the help of my friends and peers I started a campaign which got school-wide attention. I liked showing people I had a sense of humor about my situation. Everyone got on board, and I won.

After high school, I chose to attend Bucks County Community College to major in Criminal Justice. That was a huge adjustment. Navigating around campus was difficult at times because of the terrain, and I often needed help pushing up hills and opening doors. Over the next few years, I was able to gain more strength which made it a little easier to get around. I was also able to get my drivers license which allowed me to be a lot more independent. In May of 2016, I earned my associates degree in Criminal Justice.

Although getting my license helped me get out in the community and on my own more, there were still things I would struggle with. After hearing about Canine Companions for Independence and learning about what service dogs are capable of doing I thought that getting one would benefit me. I applied in 2013 and in February of 2016, I went to Long Island, NY for training. I spent two weeks learning all the commands, how to handle the dog, and how to take care of the dog. I was matched with a service dog named Fliegel. He has helped me become independent in so many ways. He knows 47 commands and can help me with a variety of things like opening doors, picking things up off the ground, and carrying my lunch or grocery bag. The command that helps me the most is when he pulls me in my wheelchair. I don’t have a lot of endurance, but I know I can count on him to help me.

Even though my injury completely changed my life from the beginning, I knew that I didn’t want it to stop me from living my life. I was determined to try new sports and activities, go out with my friends, and go on vacations with my family. I played wheelchair rugby with the Magee Eagles for a few years and was able to travel from Connecticut to Florida competing. With the support of my family and friends, I have been able to go surfing, water-skiing, zip lining, horseback riding, axe throwing, go-karting, kayaking , and indoor skydiving.

I’ve often found that there are some misconceptions about people with disabilities. By sharing my story, I hope I can educate people and help them get a better understanding of what it is like living with a disability. I’ve spoken to college classes and physical therapy students in the past, and alongside my former peer mentor from Magee, I’ve also shared my story with students at my high school and given rugby demonstrations.

Over these last ten years, I have become so grateful for everything that I learned during my time at Magee. They taught me what I needed to know to advocate for myself which has helped me tremendously. I cherish the friendships that I made while I was there.

Photo: Melissa and her service dog, Fliegel, at her graduation from Delaware Valley University in May 2018