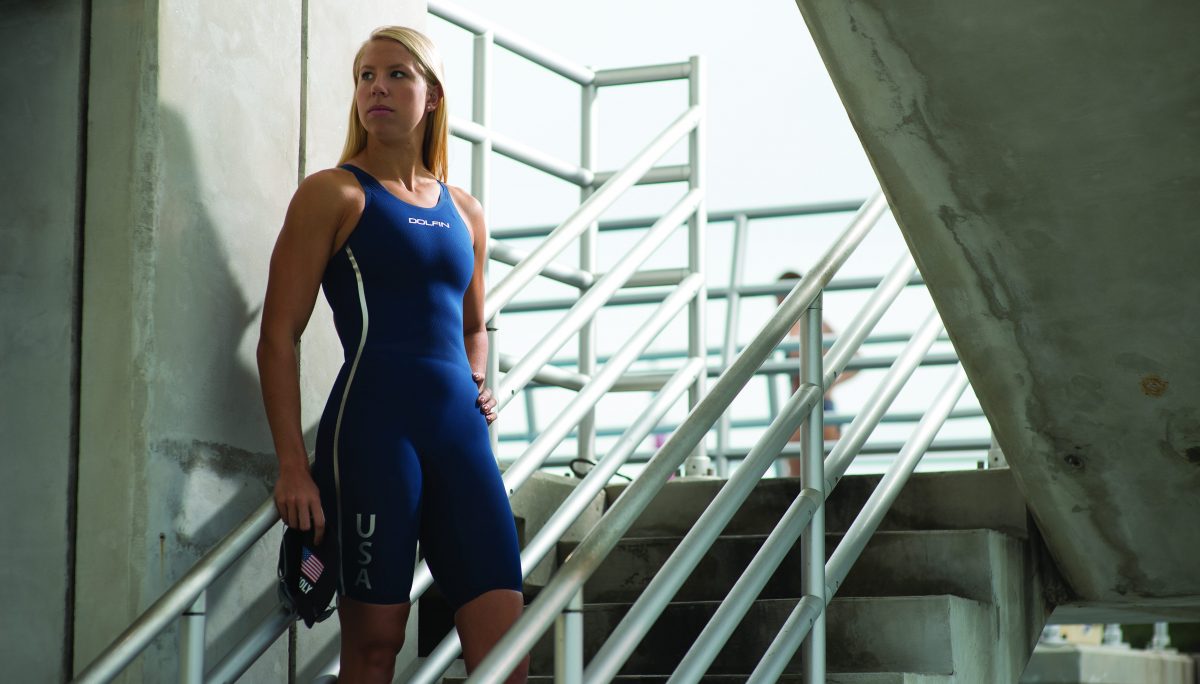 After her spinal cord injury, there were days when Michelle Konkoly wondered if she would ever stand again. Just five years later, she stood on top of the podium at the Paralympic Games in Rio de Janeiro, Brazil.

In January 2011, Michelle was a freshman at Georgetown University. As a Division 1 swimmer and pre-med student, she never expected she’d spend her spring semester in a hospital bed. One night, while trying to open her dorm room window, she slipped and fell five stories to the ground. The fall left her with countless broken bones, a shattered L2 vertebra, and a damaged spinal cord. She endured three surgeries before coming to Magee. For another three months, she was non-weightbearing on her right foot while waiting for her broken heel bone to repair. For a D1 athlete, that was especially tough.

“Everyone was optimistic about me walking again,” Michelle says. “But swimming was a whole different story. It was a very abstract idea for me; I wasn’t ready to focus on that during rehab.”

Michelle did re-learn how to walk, after a five-week inpatient stay, Day Rehab, and outpatient therapy at Magee. But she was left with permanent weakness in her legs. She returned to classes and swimming at Georgetown, but she was never again quite competitive against other collegiate swimmers. For an entire year,
Michelle placed last in every practice and competition with the Georgetown swim team.

“Honestly, I was starting to get used to always being last,” Michelle says. That’s when someone suggested she try Para Swimming.

Before her accident, Michelle had never even heard of the Paralympic Games. They are just like the Olympic Games, but all the athletes have a permanent disability. They are held every two years, summer and winter, in the same facilities as the Olympics, and the competitors train just as hard. Athletes are classified by the severity of their disability, to be sure there’s an even playing field. For instance, in swimming, there are 10 categories for physical impairments: S1 is the most severe disability while S10 is the least. Michelle competes in the S9 category; most of her competitors are amputees above the knee or below the elbow.

Just one month after learning that Para Swimming existed, Michelle was competing in trials for the 2012 Paralympic Games. She didn’t make it. The loss was crushing, but she had gained a lot, too.

“For the past year, my injury had been the most important thing about me. It was all anyone really wanted to talk about,” Michelle says. “Suddenly, I found myself in a situation where my disability was just a small aspect of my larger identity as an athlete. My mild limp actually made me fit in, rather than stand out. I was with athletes who were dealing with the everyday challenges of disabilities while also training to become the best in the world.”

Over the next couple years, Michelle’s focus was on school. A pre-med program at a prestigious university is enough to keep anyone busy. Then in 2014, she got the urge to try another Para Swimming meet. In her first competition back, Michelle made the national team. Her peers encouraged her to stick with it.

“Everyone was saying, ‘You have to go to Rio! We need you there,’” Michelle recalls. “All I could think was, ‘Guys, I have midterms! This was not in my plan.’”

After graduation in December 2014, Michelle decided to move to Florida to train full-time. She figured she’d go to one World Championships then start med school at Thomas Jefferson University that fall. Fate had other plans. Michelle and her coach clicked, and she was swimming record-setting times. She decided to defer med school and go for the gold in Rio 2016.

“In the Paralympic world, you can accelerate more quickly because the field is smaller, but nothing is a given,” Michelle says.

For the next year and a half, Michelle worked out eight times a week with her coach Paul Yetter, who had previously worked with the 2008 U.S. Women’s Olympic team. The hard work paid off. At the Paralympic trials in June 2016, Michelle smashed a world record twice and swam personal bests in all of her events. She left Trials ranked No. 1 in the world for the 50m and 100m freestyle events in the S9 class. Michelle became a Paralympian and an official member of Team USA.

“After my great swims at Trials, I knew I had fast times in me,” Michelle says. “My biggest concern was whether I’d be able to repeat those performances under the stress of my first Paralympic Games.”

Team USA works with a sports psychologist who helped Michelle overcome a plateau she had reached going into Rio. She learned recovery was just as important as her rigorous workouts in the pool. For every three hours of training, she’d spend two hours recovering, focusing on the quality of the work rather than the quantity. It’s a lesson she first learned in rehab.

“I didn’t want to leave the therapy gym until I was falling over. I’d work for eight hours straight if you let me,” Michelle says. She had to rewire that thought process.

In Rio, Michelle’s physical and mental preparation, along with the support of her family and teammates, came together for the meet of a lifetime. Michelle won four medals: gold in the 50m and 100m freestyle, silver in the 4x100m freestyle relay, and bronze in the 4x100m medley relay.

“Rio was everything I could have asked for and more. It was truly an adventure unlike any other,” Michelle says.

The magnitude of this journey—from hospital bed to Paralympic podium—is not lost on Michelle.

“It hits me when people say it all at once like that,” Michelle says. “It gives me the confidence that no matter what I face the rest of my life, I can handle it.”

Back stateside, Michelle has spent her days since the Games travelling for public speaking engagements, enjoying time with her dog, Ollie, and yes, swimming.

In fall of 2016, she visited the White House with the Olympic and Paralympic teams and even stopped by Magee to show her medals to the patients.

“I wouldn’t be where I am today if I hadn’t advanced so quickly with the care I got at Magee. It was absolutely top of the line,” Michelle says.

In August 2017, Michelle moved to Philadelphia to start medical school at Jefferson.

“After spending so much time in hospitals after I got hurt, I saw how amazing medicine was. My doctors literally pieced me back together. That motivated me on this path,” Michelle says. She hopes to one day work with kids with disabilities.

In 2020, Michelle will be 28 years old and about halfway through med school. People often ask if she sees herself going for the gold again at the next Paralympic Games in Tokyo. She hasn’t ruled it out.

“I go back and forth,” Michelle says with a sigh. “There’s actually a pool at Jeff. You never know.”