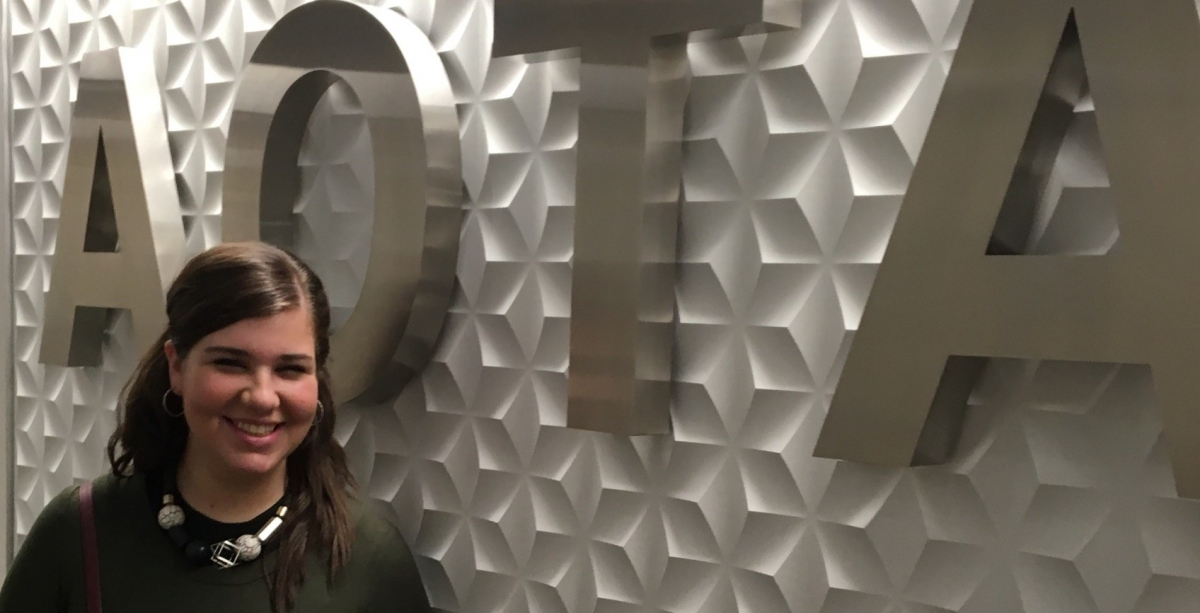 At just 23 years old, Siona Zellis endured more than a lifetime’s worth of surgeries, doctor visits, and therapy sessions. But a life-changing accident also helped her discover her career.

In fall 2012, Siona moved to Brooklyn, NY from her parents’ home in Bucks County, PA. She had her own apartment, worked as an assistant in a preschool during the day, and took college courses at night. It was a full, busy, and independent life. One night that January, she was talking with a friend outside her apartment. two cars crashed in an intersection, and one slammed into Siona as she stood on the sidewalk. The impact caused a severe degloving injury to her right leg.

Siona had nine surgeries at three different hospitals before arriving at Magee. When she got to rehab, Siona was hurting both physically and emotionally. Bedridden for weeks and unable to take care of herself, she felt incredibly vulnerable.

“I had just become an adult and then I lost all my independence,” Siona recalls. “I had a job and was going to college on my own, and this just felt like going backwards.”

As Siona began to reach goals in rehab, she enjoyed therapy more and more.

“Being at Magee was so liberating even though I was still so impaired,” Siona recalls. She especially liked occupational therapy, because it allowed her to get
back to the things she enjoyed. She likes cooking, so she worked on meal prep with crutches.

“Even if you have people who can do these things for you, just knowing you can do them is healing in itself,” Siona says.

After about a month, Siona transitioned to outpatient therapy at Magee at Oxford Valley, close to her parents’ home. She’s had a number of skin graft surgeries since 2013 and has returned to Oxford Valley after all of them. Siona cannot drive with her right foot, so she went through driving rehab and had her parents’ car adapted with a left-foot accelerator.

“Driving really gave me my life back,” Siona says. “I was determined to make life as normal as possible.”

She moved back to New York in the fall of 2013, driving herself back and forth to Pennsylvania for wound care. The preschool where she worked had held her
job for her.

It wasn’t until 2015, at almost 21 years old, that she was ready to try college again. But now Siona knew for sure what she wanted to do with her life. She enrolled
in an Occupational Therapy Assistant program at Eastwick College.

Her injured right leg had gotten a lot more stable. She was working days and driving almost an hour to school on nights and weekends. Then, just a month into her program in February 2015, Siona slipped on ice and shattered her left, ‘good’ ankle. She couldn’t believe it.

“I just started school again, and this happens,” Siona shakes her head. Three surgeries on her left ankle would follow. “I kept asking my mom, ‘How am I going to stay in school with all of this going on?’ She just said ‘Keep studying. We’ll figure it out.’”

Siona’s mom drove her to every class while she was in a wheelchair. With help from family and her passion for therapy, Siona thrived.

“I loved the subject matter so much that it drove me to work harder,” Siona says.

She graduated in December 2016 with a 4.0 GPA and received her class’ merit award of excellence. She was also asked to speak at the ceremony. Siona recorded her commencement address on video. She was in the hospital on graduation day. Multiple skin grafts to her right leg since her initial injury had not worked. She found a plastic surgeon at New York University who would take care of it once and for all. He performed a marathon 11-hour surgery, taking a piece of thick tissue from her thigh and moving it to her lower leg, disconnecting and reconnecting the blood supply.

“My leg is healthy now! It’s amazing,” Siona reports. “It doesn’t look perfect. It was deformed and still is. But the whole rehab attitude is about finding your new
normal. This is mine.” It was her 14th and final surgery to date.

In January 2017, Siona passed her OTA boards. She planned to get stronger to manage the physical demands of her new career then start looking for jobs.

“To anyone going through something like this, I would just say: your story has changed, but you’re going to write a new one.”