Back in the Game 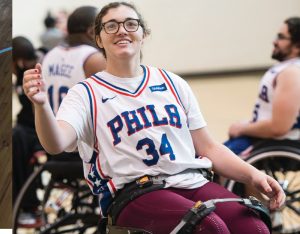 Joseline Castillo was your typical teenager back in 2015—friends, family, school, sports. However, that all changed one day during her junior year of high school when she suddenly started feeling sick. What began as cold-like symptoms and an odd headache radiating from the back of the neck quickly and alarmingly became full paralysis on the right side of Joseline’s body.

Growing up in scenic Punta Cana in the Dominican Republic had its benefits, but accessibility to a major metropolitan healthcare system was not one of them. As the mysterious paralysis continued to spread through Joseline’s body, the Castillos sought immediate medical attention at a hospital in Santo Domingo where her grandmother was a doctor. The family made the four-hour drive to the capital city, and by that time the paralysis had started creeping up the left side of her body.

The hospital conducted some initial tests, including a CAT scan, and quickly determined the cause was neurological. However, the hospital’s facilities weren’t as well-equipped as the area’s other hospital, so Joseline was transferred once again. At this point, mere hours later, Joseline was essentially paralyzed from the chest down. After being shuffled around from emergency room to emergency room, Joseline and her family finally received some answers. She was diagnosed with transverse myelitis, an autoimmune disease that causes inflammation of the spinal cord. This is a relatively rare condition with only an estimated 1,400 cases per year.

Between the rarity of the condition and limited access to medical resources, Joseline and her parents decided the best course of action was for her to go live with an aunt in Washington D.C., where she began receiving treatment at Johns Hopkins. While at Johns Hopkins, Joseline was also diagnosed with acute disseminated encephalomyelitis (ADEM), which was causing further inflammation in the brain. It is during this time that Joseline began an intensive physical therapy routine at the Kennedy Krieger Institute. “It was like a full-time job,” Joseline recalls, “I was doing inpatient physical therapy three times a day for two months during that summer.” After this initial rehab regimen she transitioned to outpatient PT three times a week.

While her PT schedule may have been grueling, the decision to start rehab so quickly allowed Joseline to regain much of her strength—and ultimately her independence. Through her hard work and determination, Joseline was able to go from being a paraplegic and exclusively using a wheelchair to walking under her own strength, albeit with the help of forearm crutches, in a matter of months.

Now that she was both figuratively and literally on her feet again, Joseline set her sights on regaining a sense of normalcy and returning to the things she loved. In 2016, Joseline began school at Drexel University in its architecture program. Prior to her diagnosis, Joseline enjoyed a variety of sports and physical activities including soccer, swimming, cycling, and horseback riding. When she moved to Philadelphia she began looking into adaptive sports and came across the Pennsylvania Center for Adapted Sports (PCAS), where she began trying all the sports that she could. Along with getting back into her previous sports like swimming and cycling, Joseline also tried new sports such as indoor rowing, kayaking, and sit volleyball.

While Joseline can walk with crutches in her daily life, she needed to learn to use adaptive equipment such as recumbent bikes and wheelchairs when it came to participating in sports again. “If you don’t use it, you lose it,” she says about maintaining her strength. “It’s not only great to be able to be physically active, but sports are also a form of physical therapy in a way.” 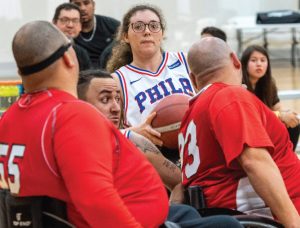 Since then, Joseline has participated in multiple tournaments with the team. For the past two decades Magee Rehabilitation and the Philadelphia 76ers have maintained a strong friendship, and the team has been a huge support of the wheelchair basketball team and individuals with disabilities. Along with lending their name to the team, they also provide game jerseys and let the Magee Sixers play a halftime exhibition game.

“I’m still terrible at it, but I love it!” Joseline says with a laugh.

Recently, Joseline and another player were invited to attend a Philadelphia 76ers game as a promotion for the wheelchair basketball league. Along with receiving a custom jersey with her name on the back, Joseline was also surprised with a grant from the Challenged Athletes Foundation that would fully fund her own custom wheelchair for basketball. Custom chairs need to be built for each individual and can cost upwards of $5,000.

Prior to this, Joseline was playing basketball with a secondhand chair that was jokingly known among her teammates as “the limo” because it was clearly originally fitted to an athlete that was much bigger than she was. With a chair built specific to her, Joseline will be able to maneuver more effectively on the court.

“It was such a surprise and I’m so grateful for the opportunity,” Joseline says. “I’m so excited to start using my chair!”