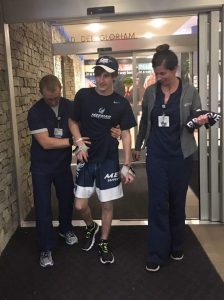 Hunter walks out of Magee with his PT, Chris Carroll, and his OT, Natalie Pondok

On a hot July afternoon in 2019, Hunter Zondory battled his way through pushups and an obstacle course with Magee physical therapist Chris Carroll by his side and hundreds cheering on the sidelines. It was all part of the AthleanX Games, an annual event in Stamford, Connecticut, where fitness enthusiasts from across the country put their physical prowess to the test. While this was an experience unlike any other, the biggest challenge of Hunter’s life occurred three years earlier inside the walls of Magee Rehabilitation Hospital in Philadelphia.

“I didn’t know if I was ever going to walk again,” Hunter said. “My faith is what helped me through that.”

“I knew something was wrong.”

It happened at a preseason wrestling practice at Messiah College in Central Pennsylvania in September 2016. The then-18 year-old and a fellow teammate were wrestling and somehow when he hit the mat, he landed on his neck.

“I heard a pop and I lost all sense of feeling and had no use of my lower body,” he recalled. “Immediately I knew something was wrong.”

Hunter had injured his spinal cord at the C5 vertebrae. After emergency surgery and several weeks recovering at Hershey Medical Center, he was transferred to Magee for acute inpatient rehabilitation.

“When Hunter arrived at Magee, he was on a ventilator and had no movement in his lower extremities,” said Chris. “He was unable to bend his arms or extend his wrists.”

Hunter and Chris during a physical therapy session.

Over the next seven weeks, Hunter worked closely with Chris, occupational therapist Natalie Pondok, and speech language pathologist Aimee Aranguren to regain his strength and learn how to live in his new body. At first, he couldn’t even sit in an upright position on a mat due to lack of core strength and sheer exhaustion. The therapists used various modalities to build muscle endurance and stimulate the movement of his arms and legs, balance and gait. And with each new day, his strength and abilities improved.

“As his leg strength increased we utilized the Vector – a device that provides bodyweight support and a safe environment to practice new skills. We also used the manual locomotor training system to increase the number of steps he could take during a therapy session,” Chris said.

Having made tremendous strides in his rehabilitation, Hunter was discharged to go home right after Thanksgiving. When it was time to leave that day, his physical therapist stood next to him on one side and his occupational therapist stood on the other. Then three of them walked out of the front doors of Magee together.

“It was amazing!” Hunter exclaimed. “My big goal was to walk out of the hospital,”

Putting Himself to the Test 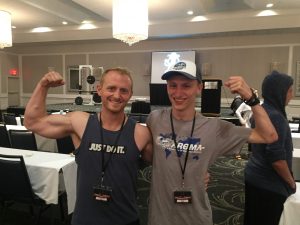 Chris and Hunter at the Athlean-X Games in 2019.

During his stay at Magee, Hunter and Chris found they had a lot in common, especially bonding over their experiences wrestling in high school and college. The two kept in touch after Hunter went home, with the physical therapist checking in from time to time. Fast forward three years to the summer of 2019 and Chris was preparing for his second time competing at the AthleanX Games.

“I knew that Hunter would really enjoy participating in something that is beyond therapy and closer to everyday life,” Carroll said. “The AtheanX event is a special community where everyone roots for everyone. I thought this would be the perfect place for Hunter to compete again.”

After speaking to Hunter and his parents about the event, Chris consulted with the AthleanX Games organizer about course modifications to accommodate Hunter’s abilities.

The three-day event kicked off with education seminars on fitness and nutrition and then the focus turned to the games. Hunter was able to participate in the event’s noncompetitive track, allowing him to do the obstacle course and other workouts that were scaled back in intensity from those faced by the elite athletes.

Hunter admits he was a bit nervous, not knowing exactly what to expect. But when it was over, he said it was just what needed.

“Going to the games has motivated me to work out more, to improve myself,” he said. “I want to try to go back again next year.”

Chris, physical therapist-turned-friend, said he never had any doubts his former patient would shine.

“He had a very successful recovery,” Chris said. “Being able to compete with and coach alongside Hunter during the event was highlight of my career. The whole experience was pretty exceptional.”