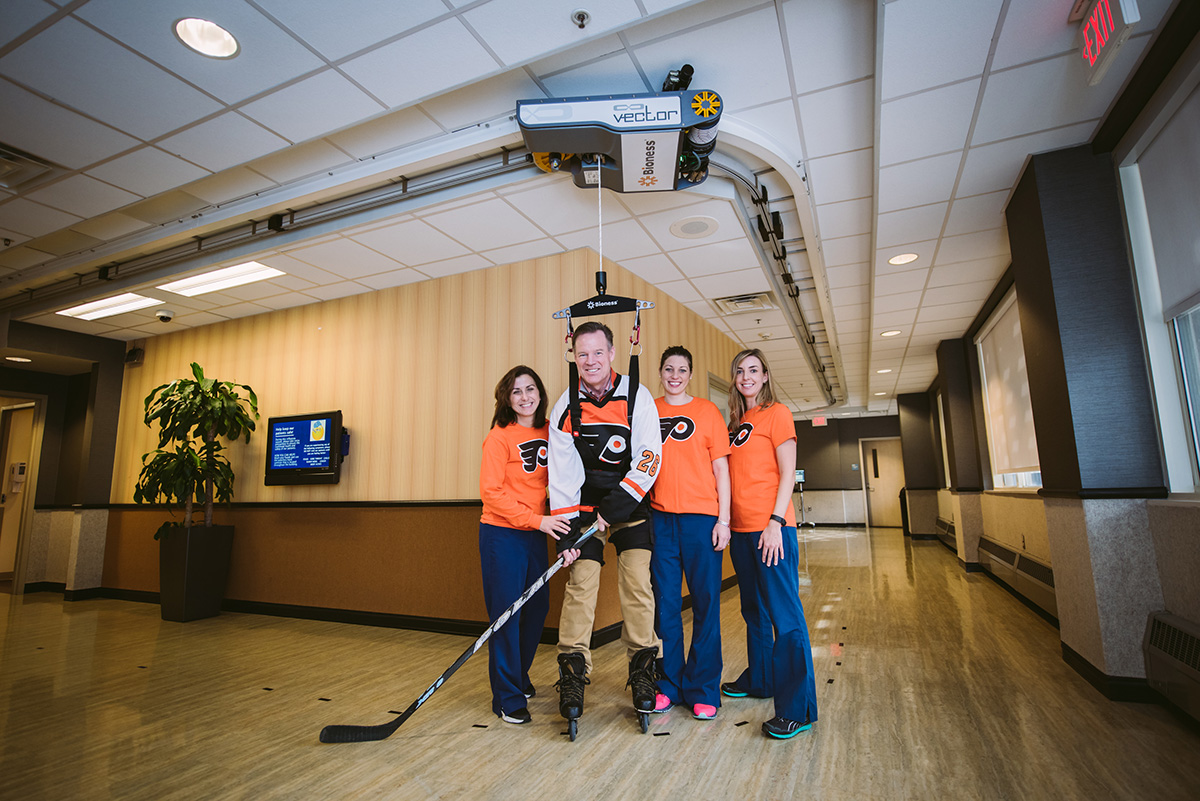 Brian Propp has been skating since he was a little boy growing up in Saskatchewan, Canada, and skated in many of the world’s biggest arenas over his 15 years in the National Hockey League, but it was his skating on the 3rd floor at Magee that would propel him to recovery from a stroke in Fall 2015.

Propp, who was drafted by the Philadelphia Flyers in the 1979 NHL entry draft had been to Magee many times before, but those visits were all about brightening the days of patients recovering from injury or illness.

“I always remember how appreciative people were when I would stop by and visit them, and I always left here feeling like I got more out of it than the patient,” Brian says. He never imagined the next time he’d be back at Magee was as a patient.

“We were tremendously scared and didn’t know what to do next,” Brian’s wife Kris says. He had been rushed to a hospital in Annapolis, MD at the time of stroke last fall. “I was speaking to doctors back home in Philly when they said Brian would need to go to rehab. Once they mentioned Magee, I knew it was going to be OK.”

The staff at Magee is often called “Team Magee,” and it was time for Brian to meet his new team. Each day started early in the morning with a visit from Dr. Barbara Browne, Medical Director of the Stroke Program. It was then time for nurses and nursing aides to help with medicine, dressing, and breakfast, all to prepare him for the main part of his day: therapy.

Physical, Occupational, Speech, and Recreational Therapists all worked together with Brian toward his goals, like strengthening his right side and improving his ability to understand and express language, including vocalizing and writing thoughts.

Magee therapists are always trying to get people to do things that they liked to do before their injury, and that’s when a question came to mind: How can we get Brian up on skates again?

Magee strives to bring the newest and most advanced therapy and treatment techniques to our patients and two years ago launched the Vector Gait & Safety System. Patients using the Vector are safely secured in a harness that uses a robotic trolley on a conductive rail that senses the patients’ movement and follows along. It’s one of the busiest pieces of equipment used each day at Magee, and Brian put it to a new test.

“We had Kris bring in Brian’s rollerblades and a hockey stick,” Occupational Therapist Paula Bonsall says. “I grew up watching the Flyers, so I knew who Brian Propp was, and we were really excited to see him skate again.”

And skate he did! Kris recalls being on the elevator with a friend who was preparing her for the worst, telling her about long term effects of stroke. Suddenly, the elevator doors opened, and Brian went flying by on his rollerblades, with three therapists chasing behind him. “That’s my husband,” Kris proudly told her friend. Brian’s team couldn’t help but smile.

After more than a month in the hospital, Brian was anxious to go home, and Kris was anxious to have him home. But at the same time, the thought was a bit frightening.

“You are back where you were before, but things are different,” Kris says. “There isn’t the same structure to your day. We relied on a different kind of teamwork to help each other with things, even a simple task,” Kris says.

After a few days “off,” Brian returned to a busy schedule as a part of the Day Hospital Program at Magee Riverfront and then outpatient therapy. He continued to work on strengthening, communication and speech, and, yes, rollerblading: this time in the basement of the outpatient facility. He returned to work at Wolf Commercial Real Estate and has also has begun talking about the warning signs of stroke with people he meets.

In recognition of his hard work and dedication, Brian was honored with the BELIEVE Award at the Night of Champions fundraiser in May 2016.