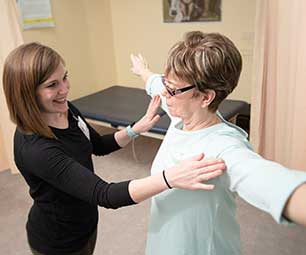 When Evelyn Cole walked into Magee Riverfront in January 2018, she needed a cane for assistance. Her steps were tiny and she was hesitant as she walked. Nine weeks later, she left the cane behind and was able to walk out the door with a big dose of confidence.

It was early 2017 when the 69 year-old grandmother of three was diagnosed with Parkinson’s disease. It was not her first bout with health issues. Evelyn is also a cancer survivor.

“I was falling a lot and tripping,” says Evelyn. “I was unsteady on my feet. I knew something was wrong.” After several visits with three different neurologists, the diagnosis of Parkinson’s disease was finally confirmed.

“My doctor recommended physical therapy to get stronger and said if it were his mom, he would send her to Magee,” commented Evelyn.

Magee Riverfront in South Philadelphia was a convenient location for the Delaware County resident and her husband, George. Evelyn’s first four weeks focused on traditional physical and occupational therapies, to increase her strength and endurance and improve her activities of daily living, such as cooking and getting in and out of a car. She was then referred to Magee’s LSVT BIG program, a specialized therapy regimen for individuals with Parkinson’s disease.

LSVT BIG is an intensive, exercise-based program that is intended to improve range of motion, quality of movement, and coordination with functional activities for people with Parkinson’s disease. For example, patients can work to increase the size of their writing to improve legibility, take bigger steps to improve walking, and make bigger hand movements to increase the ability to open containers and dress themselves.

It’s also a BIG commitment: one hour a day, four days a week, for four weeks. The program can be administered by either a physical or occupational therapist. At Magee, both disciplines are involved as needed. Research shows it can be very effective immediately after diagnosis. Patients don’t need to wait to come in.

Magee physical therapist Kristen Miller is certified in the LSVT BIG program. “Evelyn had several frustrations when she started in our program. She had a hard time writing…her words would get smaller and smaller. Her gait pattern was off. She was walking with very short steps, not swinging her arms and not looking confident when she walked.” 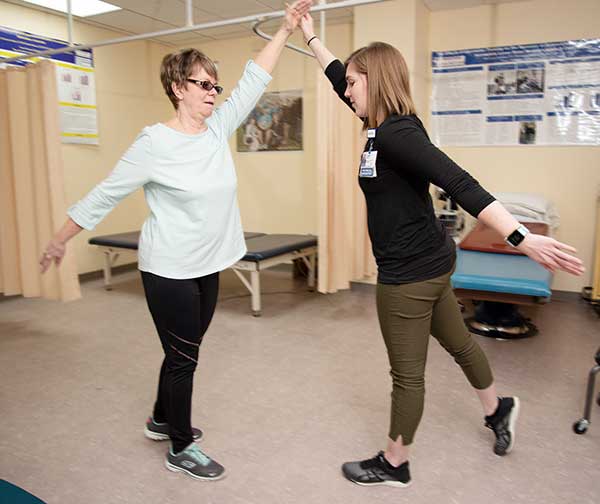 The basic premise behind LSVT is exaggerated, high amplitude movements. “Do what I do, rather than listen to what I do,” explains Kristen. The therapist does the exercises alongside the patient, taking large, oversize steps throughout the session. “It’s hard work for both of us,” says Kristen, “but it’s also fun. As a therapist, it’s a completely different mindset in the way we treat. We’re used to quality of movements, this is a shift to fine tuning as the patient progresses.”

In addition, as research has shown, LSVT works. “I went from falling about 14 times a month to only falling once in a nine-week period,” says Evelyn. “My husband says I’m a thousand times better.”

“Evelyn started improving after only three sessions,” commented Kristen. “At the end of her treatment, she could walk farther and faster. She also had more confidence with walking outside and up and down steps.”

Evelyn’s therapy team also included occupational therapist, Christina Rinehimer, also certified in LSVT BIG. “Some of the everyday tasks that we all take for granted were very challenging for Evelyn, so we established several OT goals up front. These included folding laundry while standing, making a legible grocery list, tying her shoes tightly, cutting food and opening jars. One of our strategies was to get George involved in the program to keep reminding Evelyn to keep her movements large and exaggerated. We talked to him after every session.”

A Team Approach to Parkinson’s Care

Christina explains some of the scientific components behind LSVT BIG. “LSVT BIG focuses on “recalibration” of the brain to teach patients how much effort and how BIG you have to move to actually be moving normally. Parkinson’s causes the person to move smaller, however they are not aware of how small their movements are; it feels normal to them because their neurologic system is telling them that these smaller movements are normal. Our program help their bodies relearn that they have to move BIG and think BIG.”

Both Kristen and Christina agree that having physical and occupational therapy as a team really contributed to Evelyn’s success. “When PT and OT are involved together, it allows us to work collaboratively and try different strategies; you have two sets of eyes and we can get creative,” says Kristen.

Evelyn says the best part of the program was the therapists doing the exercises with her and the one-to-one treatment. “It really kept me focused. Kristen and Christina were terrific! I enjoyed going to therapy because it was fun! They are both so down-to-earth and funny. I cried when it was time to say goodbye.”

LSVT BIG is a program for life. When patients leave Magee, they are given a home exercise program to continue independently. “My granddaughter and I do the exercises together. Walking around the house making big, giant steps,” added Evelyn. “I know I have to keep this up to stay strong.”

If you’ve been diagnosed with Parkinson’s disease and would like to receive therapy at Magee, request a prescription from your doctor to Magee Outpatient Services. Appointments can be made by calling 215-218-3900.