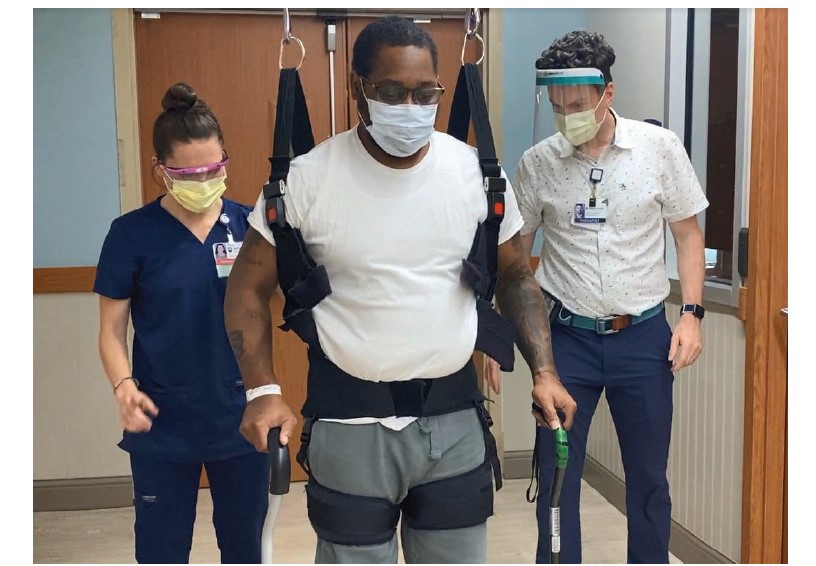 Finding Hope and Gratitude while Recovering from Rare Autoimmune Condition

Neurosarcoidosis is a rare chronic inflammatory disorder that affects the nervous system. It can appear in an acute and sudden manner or as a slow chronic illness, so often a diagnosis can be difficult. Kevin Barnes knows that all too well now. He battled a number of mysterious and debilitating symptoms for about a year before he finally got some answers and a plan for recovery.

“I didn’t think anyone could help me”

Kevin was on the job laying concrete in Scranton, PA in the fall of 2020 when he started to notice his balance was off. The nature of the job required intense manual labor and the ability to maneuver construction materials and equipment. It got to the point where he was unable to continue working.

“I couldn’t walk a straight line,” recalled Kevin. “I couldn’t stand still for a few seconds without falling over.”

Kevin’s vision started to deteriorate, so much so, that he needed a new eye prescription two months after his annual eye exam. His family started to notice Kevin’s speech was slurred. He was also extremely thirsty, drinking gallons of water a day. His health continued to decline and he sank into a depression.

“I was losing hope. I had seen so many doctors and specialists who could not find anything wrong with me. I isolated myself. I didn’t think anyone could help me,” he shared. “My 10 year-old son told his mother ‘there is something wrong with dad’ and that’s what ultimately lit a fire within me, he added.

Finally a Diagnosis and Path to Recovery

Desperate for answers and effective treatment, Kevin’s brother drove him from Scranton to the emergency department at Thomas Jefferson University Hospital in Philadelphia. Doctors ran countless tests for more than two weeks until they finally pinpointed the cause: neurosarcoidosis. The diagnosis allowed doctors to get Kevin’s health stabilized and then formulate a treatment plan.

Kevin transferred to Magee on September 17, 2021 for the next step in his recovery because of its specialized program to treat traumatic brain injuries and illness. There, he worked hard each day receiving three hours of physical, occupational and speech therapies daily to address the symptoms that had plagued him for so long.

“Our first goal was to decrease his risk of falling,” explained Jeffrey Trexler, PT, DPT, Magee senior physical therapist. “Neurosarcoidosis had impacted his right leg more than the left. In order to get him back on his feet and walking safely, we trialed different leg braces and walkers. Eventually we found one that worked best for Kevin and helped him achieve more independence.”

When Kevin was cleared by his medical team for the next phase in his PT, they used the Vector body-weight support system for Kevin to work on his balance, gait, and walking pattern.

“It gives you a sense of freedom and hope,” Kevin explained. “I really felt my progress when we started using the Vector.”

“He exceeded our expectations with how quickly he responded to treatment,” said Deana Miller, MS, OTR/L, Magee occupational therapist.

A Life Back on Track

Kevin was tearful when he thought about how far he had come in a matter of six weeks from the time he was diagnosed with neurosarcoidosis to being discharged from Magee. He said his biggest motivation was returning home to his kids and making them proud. Kevin credits his experienced and supportive care team with helping him get his life back on track.

“He’s the one who put in all the work,” Deana said. “We just helped him along the way.”