Home for the holidays

College freshman Jackie Lithgow, severely beaten at a party, leaves the hospital after 9 months in time for Thanksgiving.

After 275 days and nights in a hospital, Jackie Lithgow went home.

The parade of goodbyes lasted all morning. The chef baked a farewell strawberry shortcake. Housekeepers, kitchen staff, therapists, doctors, nurses all stopped in room 442 at Magee Rehab for clenching hugs and tearful farewells. 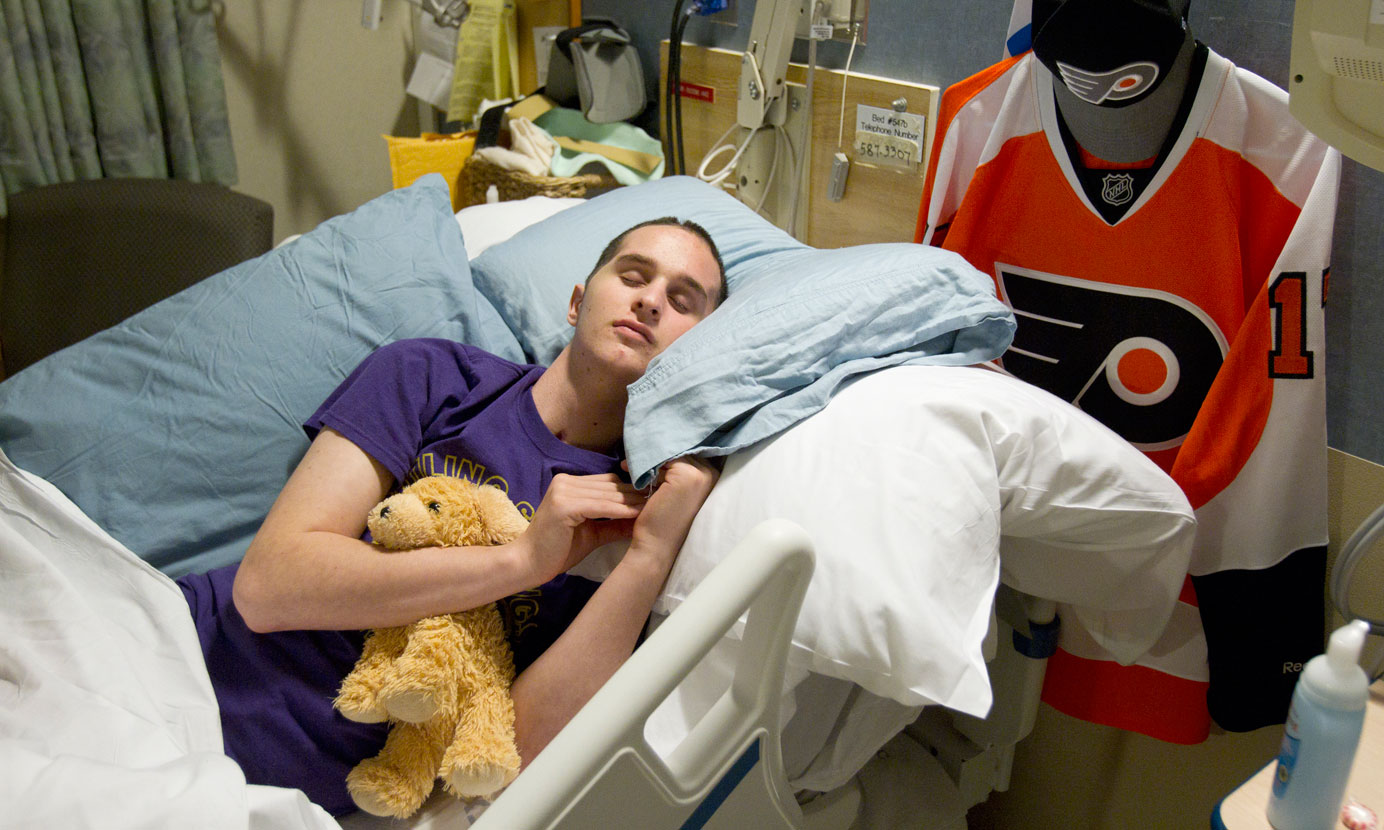 CHARLES FOX / Staff Photographer
Jackie Lithgow sleeps in his room at Magee Rehabilitation Hospital. The jersey of his favorite Flyer, Wayne Simmonds, hangs behind him.

Erin Trudell, his physical therapist, made Jackie stand up to hug her goodbye.

“Jackie, I am honored to have been the one to hear your first words,” speech therapist Aimee Aranguren wrote on a goodbye blanket hanging on his wall, the last thing to come down. “You are a rock star.”

Jackie’s mother, Lisa Lithgow, also hadn’t been back to their home in Carlisle in 275 days. Jim Lithgow, Jackie’s father, had been back only three times. Either Lisa or Jim slept in Jackie’s room every night since Feb. 23.

Val Palmer, a nursing assistant, came in on her day off. “Just to see the miracle that took place here is a real blessing,” she said. “To be able to eat. To be able to speak. Each time they took a tube out was a celebration.” 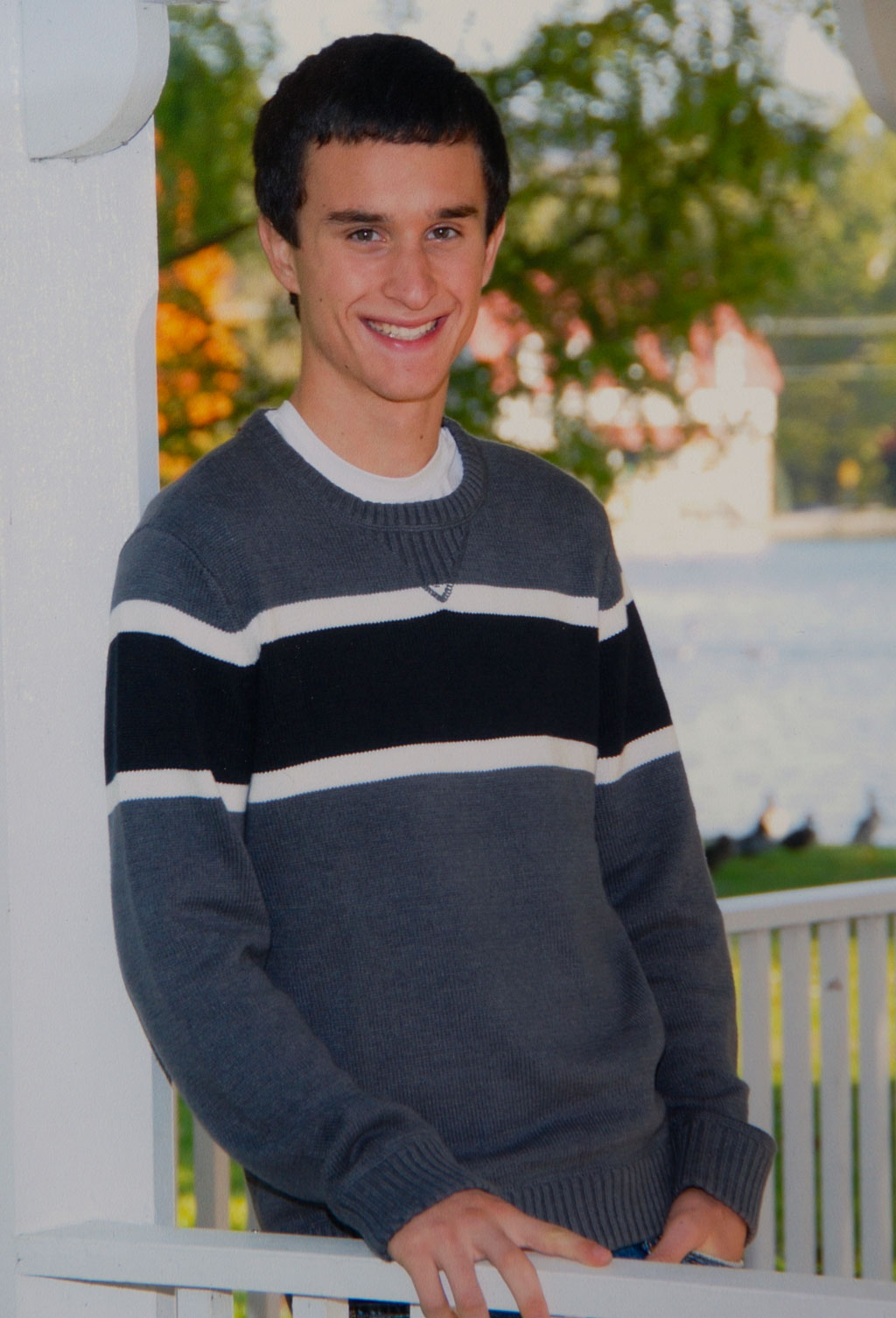 CHARLES FOX / Staff Photographer Jackie Lithgow in 2012, before the fight.

The goal for months was for Jackie, 19, to get home by Thanksgiving, and Tuesday he was discharged. “Goodbye room,” said Lisa, around noon, the last one out. “You’ve been good to us. We’re not going to miss you. Just the people.”

His mother, on leave from the Hershey Company, gave away 72 boxes of Pot of Gold chocolates that morning, and bracelets bearing one word: “Believe.”

Therapists Paula Bonsall and Erin Trudell, who worked with Jackie from the beginning, before either was convinced his spirit was still alive inside that injured brain, walked with the family as they wheeled Jackie out.

“Enjoy being home,” Bonsall told him.

His father hugged Bonsall one last time. Jim’s eyes were rimmed in red from so many tears. “Thanks for everything. You are awesome, an awesome person.”

Jackie was strapped in the front seat, window down. With his right hand, his good hand, he gave the V sign for victory as, finally, the family Honda rolled away.

Jim and Lisa, 54 and 53, fell in love at Bloomsburg University. When their son enrolled last year, he wanted to pledge his dad’s fraternity, Zeta Psi.

On Feb. 22, he received an invitation to join, and that night went to a party at a fraternity brother’s off-campus apartment. At 1 a.m. four football players from Kutztown University showed up and tried to force their way inside.

“To be able to eat. To be able to speak. Each time they took a tube out was a celebration.”Val Palmer, nursing assistant

A fight ensued and spilled onto the street, according to police and witnesses. Another freshman and friend of Jackie’s, Donald Hoover, was punched in the head by one of the Kutztown players, then kicked repeatedly on the ground.

“During Hoover’s assault,” the police report states, “Jackie Lithgow was heard by several persons to ask the Kutztown males to stop fighting and leave. At this time, Angel Cruz (a 180-pound Kutztown fullback) was seen by numerous people to punch Lithgow in the head with extreme force causing him to fall backwards and strike his head on the pavement. Lithgow was seen to be bleeding excessively from the back of his head and did not regain consciousness.”

When Jim and Lisa, en route from Carlisle, nearly 100 miles south, reached the ER doctor from their car around 3 a.m., his first words were, “How far away are you?”

Physicians at Geisinger Medical Center in Danville had to remove the top of Jackie’s skull to make room for his swelling brain. Then he got a blood clot in his jugular vein. After weeks at Geisinger, Jackie came to Magee in Philadelphia – but wasn’t there 12 hours before a brewing infection in his brain, the antibiotic-resistant MRSA, sent him to Thomas Jefferson University Hospital for 44 days and removal once again of a piece of his cranium. 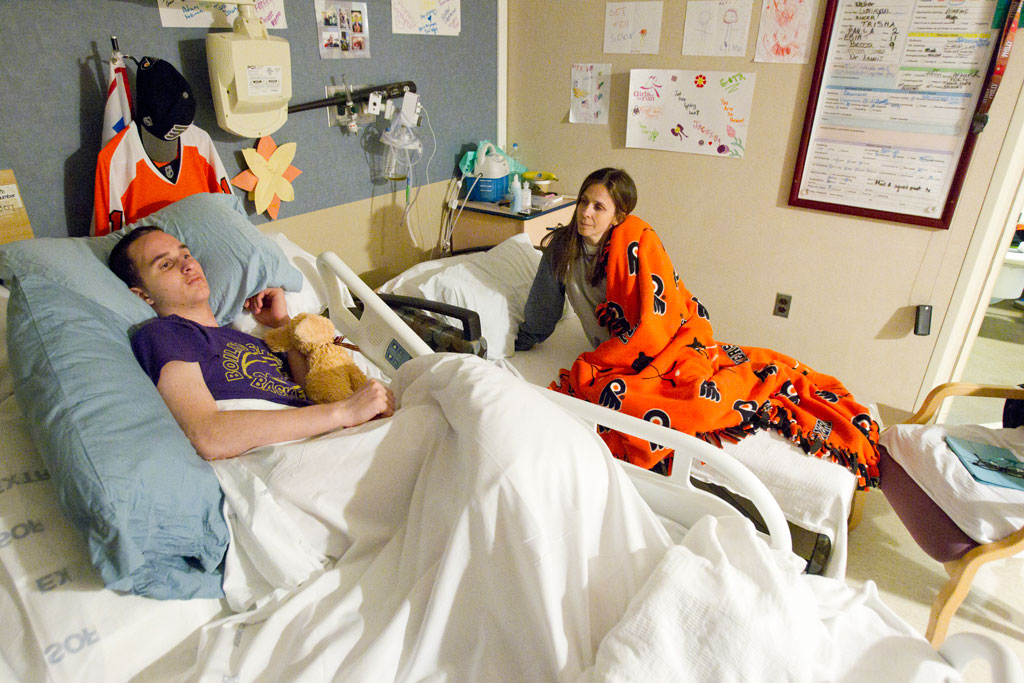 He also got meningitis.

“Here's a young man with a future full of promise, and was acting as a peacemaker, and he was struck with a single blow that has completely changed his life,” said Columbia County District Attorney Thomas Leipold. “And on the other side of the coin, for the defendant, he struck a single blow, and I'm certain did not foresee or anticipate how bad the result of that could be. And unfortunately, that just goes to show what the intersection of alcohol and ego and attitude can do, it can just produce absolutely tragic results for everyone involved.”

On Nov. 10, Cruz pleaded guilty to assault. In custody since his arrest, he has been advised not to comment until his sentencing Dec. 5.

"We all thought his day would come to tell the world his story," Cruz's aunt, Melissa Lopez, emailed from Florida, "but only after he made it to the NFL and became a role model to the youth that have walked his path. It is tragic that we must tell his story like this. ... He struggles every day with what happened to Jackie."

Jim and Lisa haven’t taken a moment yet, truly, to process how much their own lives have changed. They have been consumed with keeping Jackie alive, and helping him get better.

“There’s a ton of emotions on hold,” said Lisa. “If I would go down the path of Why? Why my kid?, Jim would bring me back. ‘Lisa, you can’t change it. Lisa, that’s just a waste of energy.’ ”

Her outlook now is clear: “Jackie easily could have died,” Lisa said. “Instead of damning God, I’m thanking him.”

Jackie has no recollection of the accident. One night Lisa did told him what happened. “I don’t understand why someone would do this to another person,” he told his mother. And cried and cried.

When Jackie started at shooting guard for the Boiling Springs Bubblers his senior year of high school, he was 5-9 and 130 pounds. In the hospital, his weight fell below 100. He couldn’t speak, stand, swallow, sit up. Every part of his brain was injured. Brian Kucer, the doctor in charge of brain injury programs at Magee, believes that Jackie’s brain sustained multiple blows. Lisa wonders if he was kicked on the ground like the other boy. 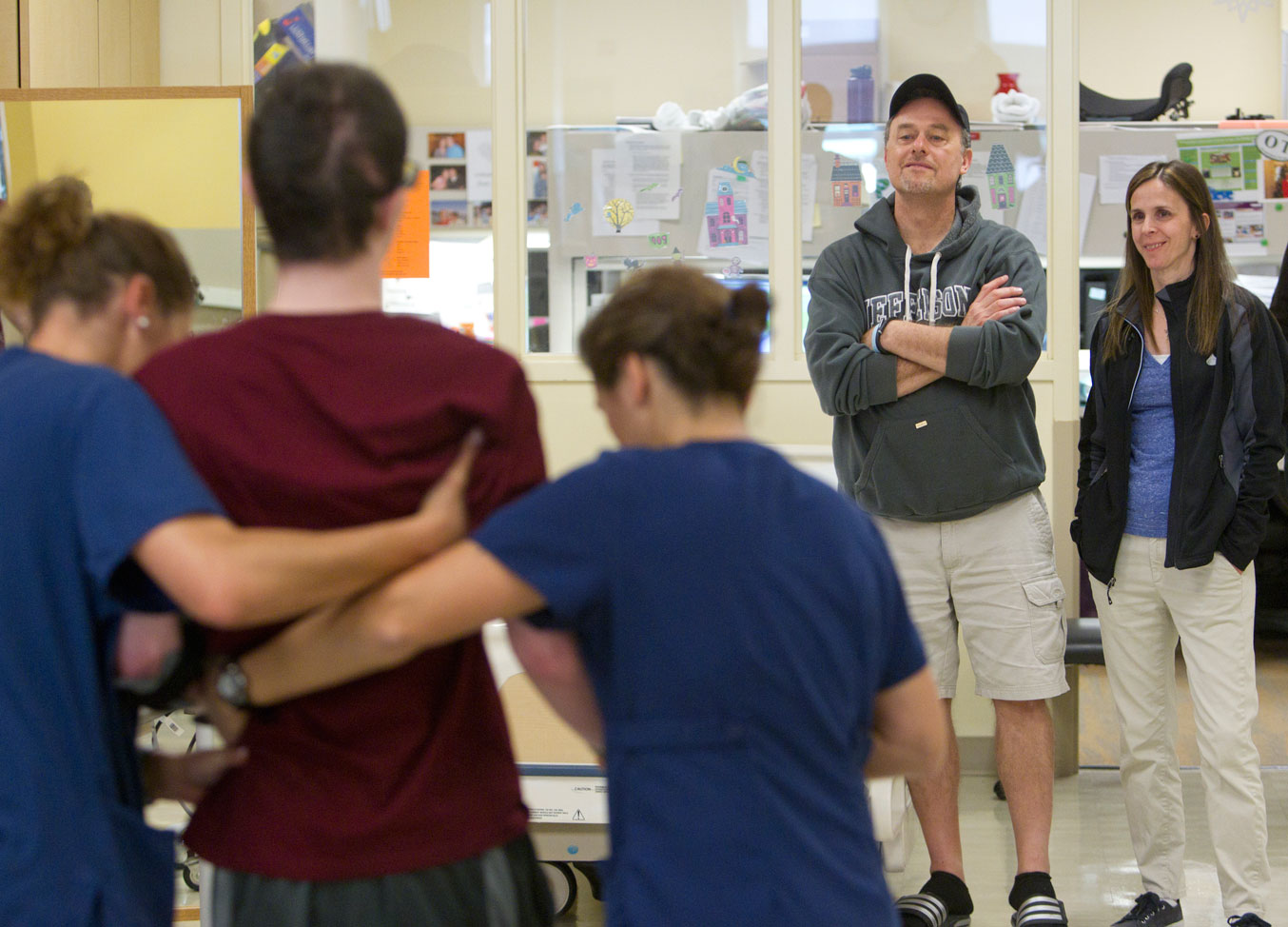 CHARLES FOX / Staff Photographer
Jackie Lithgow gets closer to walking on his own at a therapy session at Magee Rehabilitation Hospital, watched over by his parents, Jim and Lisa.

Everything that once came naturally – balance, movement, speech – must be relearned. “He has to think about everything before he does it,” says Bonsall, his occupational therapists.

The left side of his body remains contracted, his left fist clenched. Every few weeks, a neighbor from Carlisle would bring Jackie’s dog, Jovie, an 85-pound golden retriever, for a visit. Jovie would try her best to lick Jackie’s hand open.

His therapists say his brain is young and his body is strong and they think that in five years he will be nothing like he is now. “I still believe Jackie can be able to walk on his own, to take care of most of his basic daily needs,” agrees Kucer, his doctor. “But that’s a long road and he’s got a long way to go.”

Jim and Lisa believe Jackie will return to college, marry and have a family.

“The dream is not over,” Lisa often says to Jackie. “Just delayed.”

Jackie’s sister, Lindsay, 25, called from her home in Bethesda, Md., as she did every other night.

“Nothing, just chilaxing,” told her.

Lindsay shared a story. “Oh my God,” Jackie said, and started laughing. Even though he has a tube in his stomach, bladder issues and still can’t take a step without support he laughs all the time.

Jackie sat on the side of his bed in Bloomsburg in T-shirt and boxers. Tucking his right leg under his left, he lifted both and swung them onto the bed. 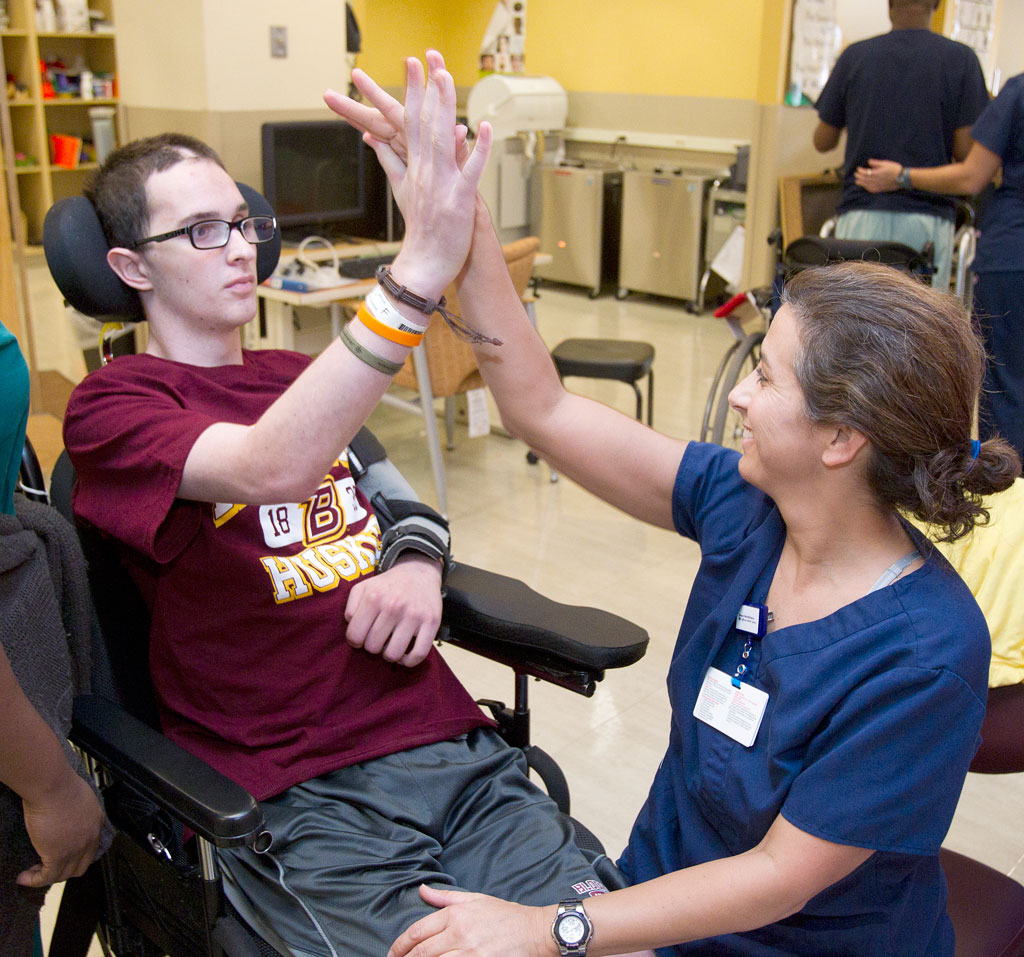 He kissed his wife and left. It was his night at the hotel.

Lisa emerged from the bathroom in sweatclothes, her pajamas.

She leaned over, kissed Jackie’s cheek.

“Love you,” she whispered.

Lisa grabbed her Philadelphia Flyers fleece blanket, orange and black with team logo, and curled up beneath it on a little chair that pulls out into a bed, and turned out the light.

People have been wonderful.

Golf outings, bake sales and fundraisers at home and at Bloomsburg have netted more than $50,000 to help with bills. Five kids from the neighborhood sent $15.08 they raised from selling Tang.

“The dream is not over. Just delayed.”Lisa Lithgow

Lisa’s coworkers at Hershey gave her their vacation days. Jim, a special education teacher in Boiling Springs, had 180 sick days accrued from 30 years of teaching and used them all. Magee used charity funds to help pay their hotel bill.

Jim and Lisa have no idea how much their medical bills are or how they will pay for Jackie’s care going forward. He begins daily rehab in Hershey on Monday. They haven’t worried about it. They will find a way. They will sell their house if they must.

In six months at Magee, Jackie left one time for non-medical reasons — to watch the Philadelphia Flyers practice two weeks ago in Voorhees. Jackie inherited his Flyers obsession from his father, who grew up in Warminster.

The players gave Jackie signed hockey sticks, jerseys and team sneakers. They invited the whole family into the locker room, praised his progress, and encouraged him to keep battling.

Jackie’s therapists say he came back from that day and initiated more, spoke more, smiled more. He believed more in his own possibilities. His progress had already begun to accelerate, and really took off. 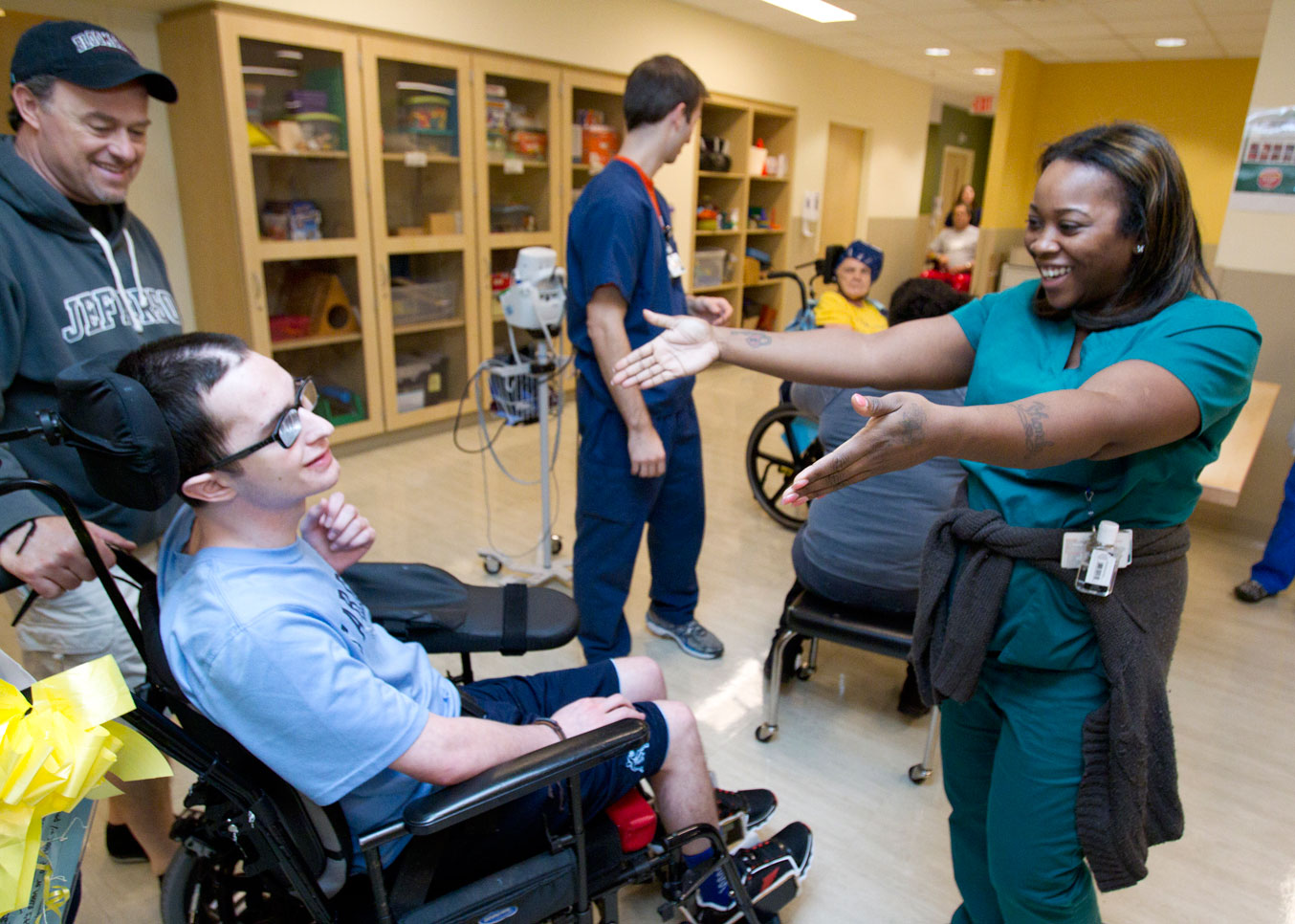 The family pulled up to their home in Carlisle on Tuesday afternoon.

Balloons were tied to the porch railing. A sign on the storm door read, “Welcome home, Jackie. Home Sweet Home.”

Jackie started to swing his legs out of the car before his parents could get the wheelchair.

Out bounded Jovie — into Jackie’s lap, right there in the driveway — smothering the boy’s face with kisses.

Jim and Lisa wheeled Jackie inside.

“Thank you,” he said to his parents.

“For bringing me home. It’s awesome.”

They ordered pizza and he sat at the kitchen table and ate two pieces with his right hand, like any other hungry college kid, although his parents repeatedly pleaded, “Jackie, little bites.”

Then he forked down two pieces of strawberry shortcake.

Lisa had opened a kitchen drawer to get that fork.

“Oh my gosh,” she said. “Real silverware.” She stood there looking down into the open drawer.

“I can’t believe for the last nine months and two days, until now, we were in a hospital.”

They slept in their own beds.

Today, for Thanksgiving, they hope to visit Lisa’s parents in Hershey. Jackie can’t wait for his grandfather’s famous mashed potatoes. 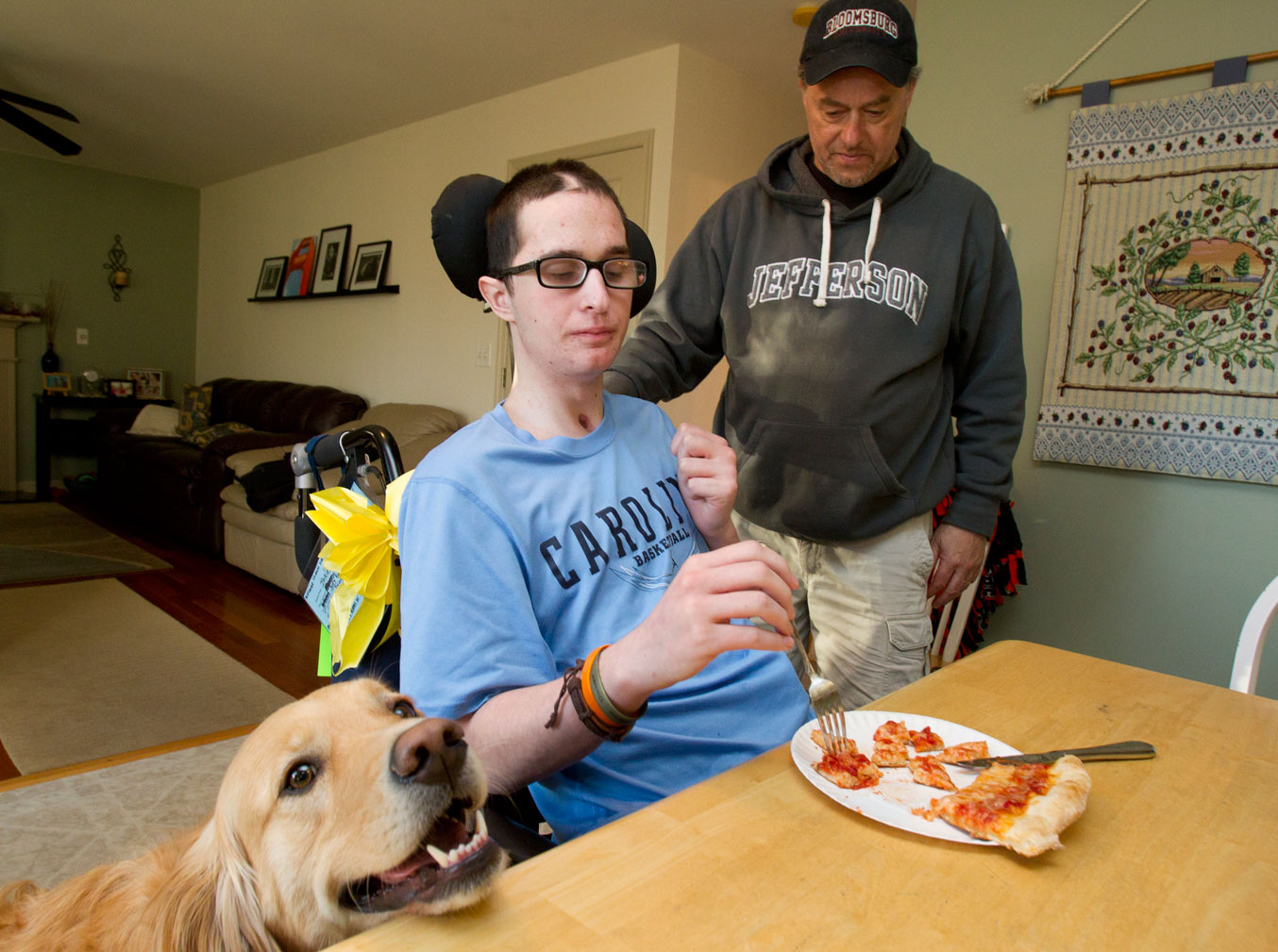