Michael Rahilly toasts his daughter with help of Team Magee and his wife Cheryl.

A devastating car crash in 2017 left Michael Rahilly paralyzed, relying on the use of a wheelchair and a trach to aid in breathing. The 62-year old thought his dream of standing to toast his oldest daughter and her husband on their wedding day was out of reach.

“My other two daughters had eloped so this was the only daughter that I was going to be able to walk down the aisle,” said Michael of Eastampton Township, New Jersey. “We started planning the wedding before my accident. The accident occurred ten months before her wedding. She wanted to cancel the wedding and I told her no.”

Michael came to Magee a second time in August 2018 to regain his strength following an episode of pneumonia. It was just three weeks before the wedding. That’s when Team Magee stepped in to help make this father’s dream come true.

“Over the course of our sessions, he was telling me how his daughter Lauren’s wedding was coming up and how he really wanted to be there. He wished that he could stand for the wedding,” explained his physical therapist Chris Carroll.

But even more than that, Michael wanted to give a speech and a champagne toast at the wedding. And he wanted it to be a surprise for the bride. Michael’s Magee care team agreed that with his improving leg strength, he was capable of working towards this special goal and his therapy was developed with this in mind.

“He is one of the kindest people I have known,” said Chris. “He has an awesome smile. When he smiles it makes everyone else feel good.”

In the weeks leading up to the wedding, Michael worked with his physical therapist, occupational therapist and speech therapists at least three and a half hours a day to prepare for the event.

“We just kept practicing in every session. We had him in the vector, the body weight support system, that helped. We practiced from the elevated mat and from his wheelchair. We had him practice to see how long he could stand with us helping him. He wrote his speech and we practiced the speech while he was standing,” Chris said.

Michael worked with speech therapists Deb Diraddo and Aimee Aranguren on his voice projection, for clarity of his voice and pronunciation. Occupational therapist and Spinal Cord Injury Supervisor, Gina Cooke, brought a champagne flute from home for the next step in therapy – giving the toast.

“We practiced with my stemware. We utilized electronic stimulation to assist with strengthening the arm muscles needed to raise and hold the glass. When he would stand in PT, I would give him the flute. He worked on talking, standing and holding the glass at the same time,” said Gina. “He invited four of us to his wedding as guests. He kept telling his daughter that he wanted us to be there because we were his therapists and he cared about us so much.”

When Michael wasn’t working on the surprise wedding activities, he was practicing the father-daughter dance with the bride-to-be.

“I wanted to dance with her and she is a dance instructor. She would come over and we would go to the rooftop at Magee, out in the open and she would dance around the wheelchair and I would spin and turn and it was still just as good as dancing with her,” he said.

Michael went home three days before the wedding, excited about what was to come. When it was time for the toast on the big day, the four Magee therapists – Gina Cooke, Chris Carroll, Miko Quisumbing and Rachael Houtman – knew what to do.

“We all went up and helped him stand,” Chris explained. 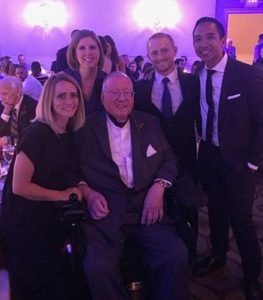 With support from his friends at Magee and his wife Cheryl holding the microphone, Michael rose from his wheelchair with champagne flute in hand.

“At the end of the speech, I said to the invited guests, ‘Please stand with me,’ and there wasn’t a dry eye in the room. My daughter, she got very emotional,” Michael said. “They helped make that wedding day more than me just sitting there passively. I was actively engaged in that day. It was one of the happiest days of my life.”

“Michael was able to send off his daughter the way he wanted to. That is a memory they will have for now on,” said Chris.

“It was such a special moment that we were honored to have been a part of,” said Gina, who keeps a photo of Michael’s toast in her office. “We come into people’s lives every day. It’s our job but it’s also our passion. We love what we are doing and we want to help every single person.”