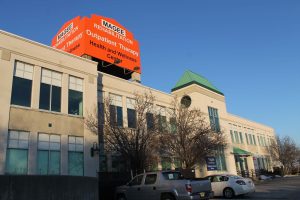 After her longest year, Temple lacrosse star walks at graduation

It was April 29, 2015, and Rachel Hall was biking through Temple University's campus, in that blissful, liminal space between finals and graduation, where the phrase "the rest of your life is ahead of you" is, for once, not a cliché.

Rachel Hall, injured in a hit-run, crosses the stage at the commencement ceremony. Her mother had picked up her diploma last year.

Behind her was a double major in sociology and criminal justice, and four years of playing goalkeeper for the women's lacrosse team.

Ahead was a spot in the District of Columbia police academy and a career in law enforcement.

The car hit her at 13th and Diamond Streets. She flew over the hood, over the roof, and crashed to the pavement. Her St. Christopher medal was wrenched from its chain and bounced into the street.

A few days later, with Hall lying in a coma at Temple University Hospital, her father and brother went back to the intersection. Something glinted against the asphalt.

It was the St. Christopher medal, battered but whole. They brought it back, put it on a new chain, and gave it to Rachel.

She has worn it all year, through months of grueling rehab, as she has learned to walk and talk and eat again.

She wore it Thursday, when she walked, at last, at Temple's graduation.

Read the full story at philly.com.