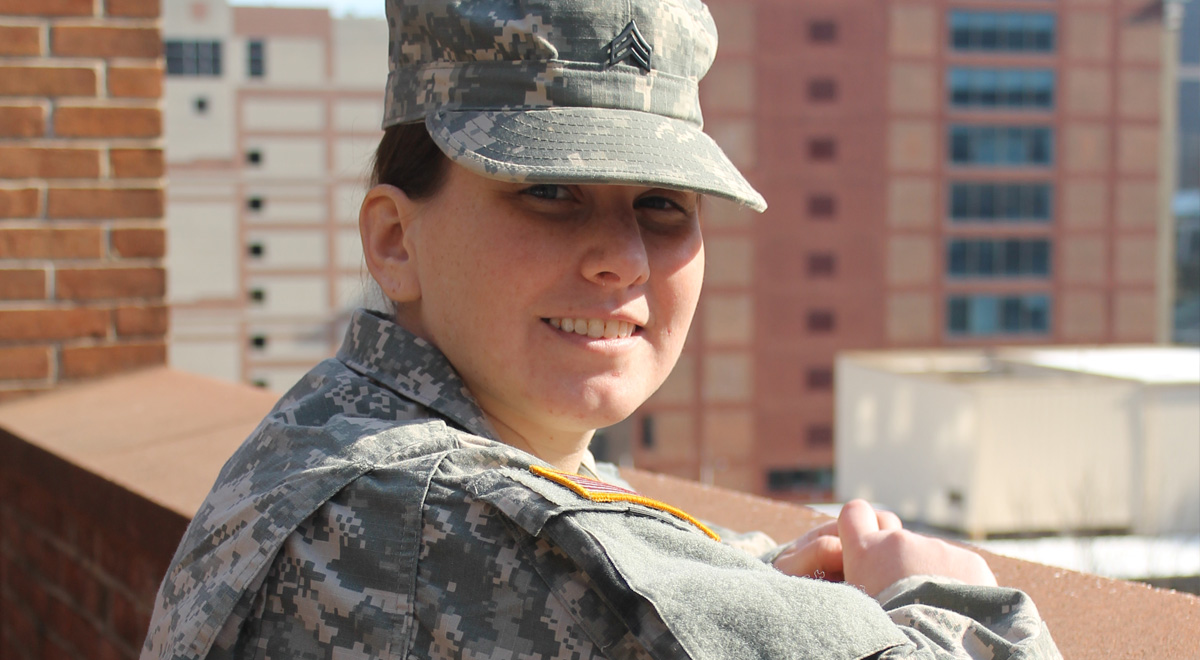 Before her car accident, Jacqueline Gilbert was a member of the Military Police in the Army National Guard. You would expect a traumatic brain injury to impact her military career. And it did; now, she’s been promoted to sergeant.

But there was a lot that happened in between. On May 5, 2012, Jacqueline was in a horrific car crash. She was in a coma for 15 days, and sustained dozens of fractures in her ribs, a broken collarbone and two inch blood clots in her brain. The clots were successfully removed, but the surgery left her with a traumatic brain injury. When she arrived at Magee, she had to relearn everything—and we do mean everything. “Basically, I was being rebuilt,” she said. “I had a feeding tube, a tracheotomy—I had to relearn how to walk, how to talk, how to eat… I had to start over.”

And relearn she did. She went through therapy with the same focus and drive she brought to military training. She was not only determined to get back to where she was before—she wanted to be even better. “I wouldn’t accept that I had any limitations, or that I couldn’t accomplish certain things,” she said. And one of those things was getting back to the military. While her time as an inpatient and outpatient prepared her for life in the real world, she had a long way to go before she was National Guard ready. Not only did she have to meet physical requirements to be cleared for active duty, but she also had to relearn skills and procedures she had down before her injury. “I went to the gym every day to get my strength back,” she said. “But I also reread all my military manuals, and retaught myself everything I could. When I was allowed to go back for drills, I practiced with my team. I was determined.”

Her hard work paid off. In January 2013, she was cleared to return to the National Guard on a limited basis and promoted to sergeant. She was officially and fully medically cleared by military personnel in November 2013. But after all her hard work to leave Magee, Jacqueline did something that made everyone at the hospital smile: she came back. Not as a patient, but as a volunteer. She started in dining services (which, she points out, is a LOT more than preparing and serving food—it involves a great deal of one-on-one patient interaction) and was so loved by the staff and patients that she was offered a part-time position. But she didn’t stop there. She also serves as a peer mentor, sharing her knowledge and experiences with newly brain injured patients, and encouraging them to believe in a way back. “When I tell people I was a patient at Magee, they never would have guessed,” she said. “You think, ‘Who am I to help anybody?’ But just something as simple as sharing your experiences gives people hope. They can take that little bit of information and do great things with it.”

So what’s next for Jacqueline? She is currently working toward a career in rehabilitation with soldiers and other military personnel. She wants to provide others with the same support that was provided to her—and everyone at Magee agrees there’s no one better suited for that role than her.