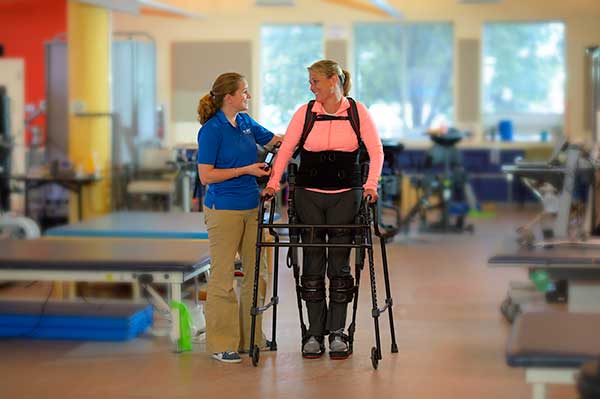 “My injury changed my life, but that doesn’t mean I stop living.”

When Cyndi Corcoran turned 50 years old in 2018, she knew exactly how she wanted to mark the milestone birthday: she was going to Disney World! The vacation would require a lot of planning—a whopping 42 family members were joining to celebrate. It was also Cyndi’s first major trip since her spinal cord injury three years ago.

“There’s a lot of fear,” Cyndi admits. “Fear of how you’ll transfer onto all the rides, fear of people watching you, you don’t want to be in the spotlight.”

Cyndi had been to Disney World many times in the past, but this was her first experience using a wheelchair. She proudly says she was able to overcome her fears and enjoyed the trip of a lifetime surrounded by her husband, children, and extended family.

“My injury changed my life, but that doesn’t mean I stop living,” Cyndi says.

It was back in 2015 when Cyndi’s life changed in just a minute and a half.

A lifelong athlete working as a physical education teacher and coach, Cyndi was an avid runner. She began feeling hip pain from running and went to an orthopedic specialist. “I was told the pain was generating from my spine and was given a series of epidural injections. The first one was great,” Cyndi recalls. “But after the second injection, I felt a tingling in my spine and numbness in my legs. I knew immediately something was wrong.”

Cyndi had suffered a stroke in her spine, an extremely rare complication from an epidural injection.

“It’s as rare as being struck by lightning or winning the lottery. That’s what they told me,” she explains.

Cyndi spent five days in the hospital with hopes of regaining movement in her legs, but an MRI confirmed the permanent damage to her spine. She came to Magee for intensive therapy.

After eight months, she was able to walk with crutches, and she did regain feeling and movement in her left leg. The athlete in Cyndi was still not satisfied. “I just kept thinking, the more hours I put in, the faster I was going to be healed, which is not the case with SCI,” Cyndi says. “Magee helped me realize this is not like a sports injury and helped me accept that the process could be slow, but each day is important in my recovery.”

That’s when she heard about Gaining Ground at Magee Riverfront.

“This program was amazing for someone like me who likes to work out,” Cyndi says. “I didn’t know something like this even existed.”

Gaining Ground is an intensive, specialized exercise program for people with neurological injuries. The four- to six-week program is five hours a day, three days a week. Participants receive one-to-one therapy from a physical therapist and a personal trainer. Group sessions bring everyone together to share successes and challenges. A weekly education session provides tips for practical living with a disability.

With the help of physical therapist Liz Watson (pictured above,) Cyndi has improved her gait with crutches. Proper technique and repetition has helped to preserve her energy and progress her recovery.

Cyndi took a leave of absence from work to focus on her rehabilitation. A major goal for her now is returning to teaching. Because of the accommodations she’ll need, Cyndi won’t return to her old school building, but she has been back to visit her former students.

“It’s been a long journey, but I’ve come to terms with my injury,” Cyndi says. “Every little step is an important one, and you can’t be discouraged.”