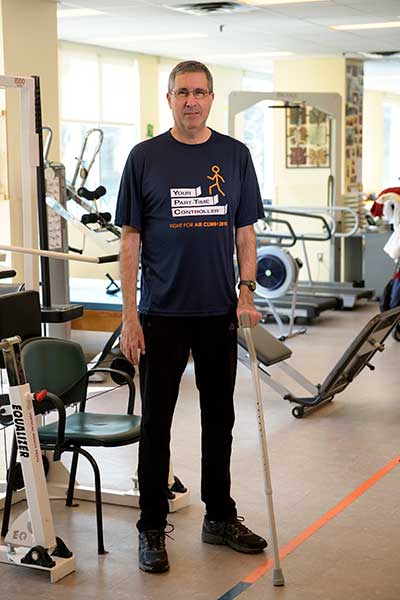 “Each day there’s something little that’s new in my healing, which I recognize, and it adds up."

On the morning of February 7, 2017, 62-year-old Eric Fraint was on a business trip in Houston, Texas, preparing for a day of meetings. However, something wasn’t quite right: when he woke up and got moving, he noticed a strange heaviness in his feet. Certain it was nothing serious, Eric left his hotel and began his day.

As time went on, the numbness continued to spread up his legs and into his fingers. By mid-morning, he was walking oddly, but he brushed it off and told people
he had thrown out his back. By lunch, walking had become significantly difficult, and by dinner, he could no longer stand up on his own.

Eric decided to sleep it off and staggered to his room in the hotel, propping himself up with both hands on the wall and sliding down the hallway. However, when he tried to get out of bed around 2 a.m. and collapsed, he finally called the front desk. They immediately alerted 911.

Thirty-six hours from the initial onset of symptoms, Eric was almost completely paralyzed from the neck down. The doctors diagnosed him with Guillain-Barre Syndrome, a rare disorder in which the immune system attacks the lining of the peripheral nervous system. There is currently no cure.

Eric was then flown back to Philadelphia in an air ambulance. At well over six-feet-tall, he recalls the trip, joking that the plane was so small that his feet touched the tail and his head was nearly lying in the cockpit. After two weeks in acute care hospitals, Eric transferred to Magee, where he remained in inpatient care for nine weeks.

Over the duration of his stay, Eric saw significant progress, which he attributes to the expert care he received from Magee’s therapists.

“The therapists at Magee were my introduction to the world of therapy,” Eric said. “It was there that I learned the differences among physical, occupational, speech and recreation therapists. They were fantastic.”

While he had made significant gains during his time as an inpatient, Eric still had a long road ahead of him. His wife made modifications to their home to accommodate his wheelchair, and she bought a new van to ease his transition.

Going back home was one of his greatest worries. “At Magee, there was a team of doctors, nurses and therapists to help, but at home, I worried that all of this would fall on my wife and family and that I would be a burden to everyone,” he said. Magee’s therapists were able to help ease his fears.

“When time is up at the hospital, the next phase of your recovery begins,” he said. In addition to recovering function, the therapists also teach you how to live after you leave the hospital.”

Eric’s recovery continued in Magee Riverfront’s Day Hospital program five days per week, then continued with a less intensive course of outpatient therapy.
Just a year or so after arriving at Magee completely paralyzed, Eric is back at work and able to walk without assistance.

“Each day there’s something little that’s new in my healing, which I recognize, and it adds up,” he said.

Before developing symptoms of Guillain-Barre, Eric had hiked the Grand Canyon each year, even becoming a member of the Grand Canyon Association’s Board of Directors. “I’m looking forward to visiting this year, he says. “Hopefully next year, I’ll be back to hiking the trails—that’s my goal.”