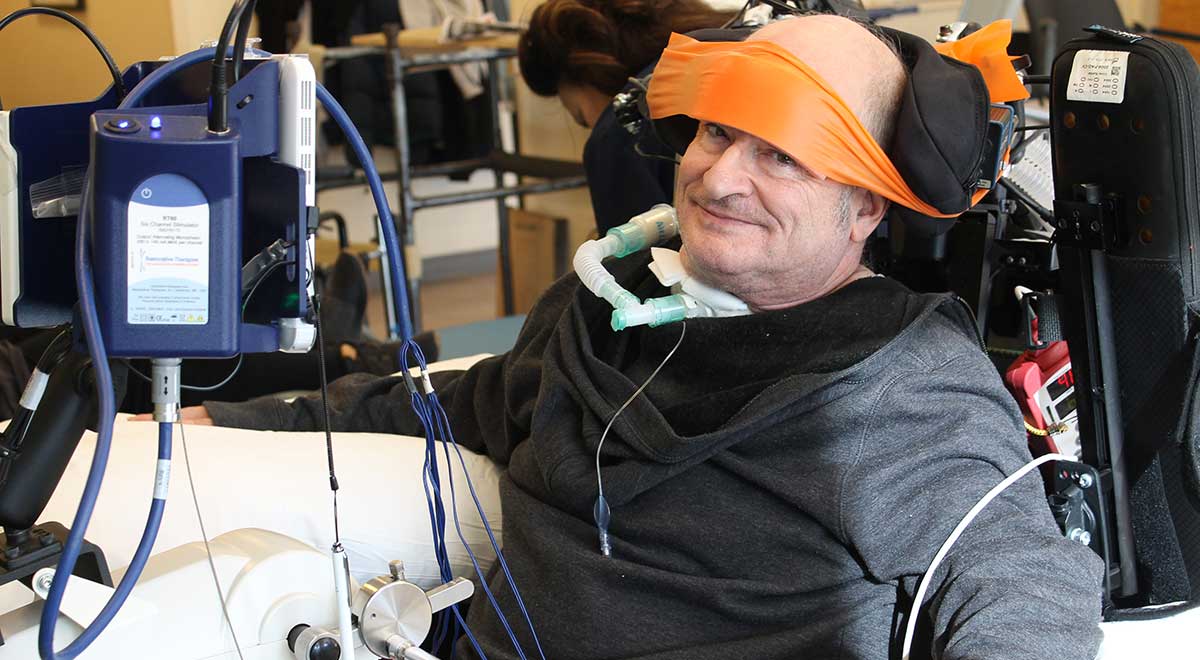 These days Dr. James Isenberg is a familiar face at Magee Rehabilitation. The mathematician and college professor is often seen motoring down the hall in a power wheelchair with his signature Boston Red Sox hat.

He and his wife, Pauline, are part of the Magee family and regulars at Magee events celebrating patient successes, raising funds for support services and interacting with staff.

In December 2017, during a business trip to Australia, Jim was standing in the ocean when he was knocked over by a huge wave that pushed his head into a nearby sand bank, injuring his spinal cord at the third cervical vertebrae and leaving Jim paralyzed from the neck down. He was rushed to a local hospital where he spent months in intensive care, relying on a ventilator to breathe.

Once Jim was ready for rehabilitation, Pauline’s job in Washington, DC drove their initial search there, however, after careful research, the Isenbergs chose Magee Rehabilitation Hospital in Philadelphia. “Magee’s specialization in spinal cord-injured patients with a ventilator, and their connection with the Christopher and Dana Reeve Neurorecovery Network, gave us confidence this was the best place for Jim. We also noted that Magee has a very active rehabilitation program for patients like Jim,” recalls Pauline.

Jim’s recovery: a marathon, not a sprint

Jim was flown via medical transport from Sydney, Australia to Jefferson Hospital for Neuroscience in February 2018. There, he had a diaphragmatic pacer installed to assist in breathing. A week later, Jim was transferred to Magee.

Pauline was immediately impressed with what she described as the Magee team’s “can-do attitude.” “They told us right away, they were going to get Jim up and work on the muscles he could still control,” she said. “This was a welcome change from the intensive care unit in Australia where they were cautious about allowing Jim to do anything.”

“When Jim arrived, he could only mouth words and he obtained his nutrition through a feeding tube,” recalls speech-language pathologist Deb Diraddo. “This was naturally frustrating to a person who is used to speaking for a living, and loved to eat. Our initial goal was to enable Jim to regain verbal communication while on the ventilator. The respiratory therapy team worked closely with us to ensure Jim had adequate breath support for both breathing and speaking. It was a slow and complex process,” explains Diraddo.

Once Jim got his voice back, he had a lot to say. “First on the list—I wanted to eat a cheesesteak,” Jim says matter-of-factly.

Team Magee here in Philly could certainly relate to that. The process of helping Jim learn to swallow real food and manage his breathing happened over time and Jim eventually went from tube feeding to eating whatever he wanted…including a cheesesteak. 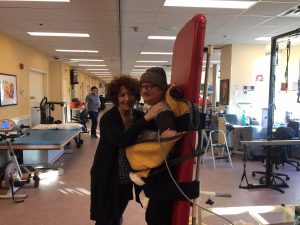 Jim, standing upright with a tilt table, along side his wife, Pauline.

At the same time, physical and occupational therapists worked together to strengthen Jim’s muscles to achieve greater function and gain independence. “Head and neck control and sitting balance were the primary tasks,” says physical therapist and neuro-certified specialist Rachael Houtman. “His muscles were very weak. We utilized electrical stimulation to facilitate the muscles in his lower extremities assisting with blood flow and muscle tone. This allowed Jim to increase his tolerance to upright and promote weight bearing through activities such as the tilt table.” Down the road, this also allowed Jim to use locomotor training, enabling him to “walk” while harnessed in a supported treadmill system and assisted by therapists.

Fitting Jim with the right wheelchair was key. As a Model Center for spinal cord injury, Magee has access to a wide variety of power wheelchairs. Jim’s occupational therapist, Natalie Pondok, had Jim trial different wheelchairs for the right fit. They finally settled on one that was operated by his chin. “This high-tech device also includes switches which allow Jim to independently shift his weight to protect his skin from developing wounds and power the chair on and off,” explained Pondok. It also allowed him to speed around the corridors of Magee, seemingly with abandon.

All of Magee’s team members who worked with Jim and Pauline agree on one thing: Jim was incredibly motivated to get back to the best life possible. “Most people can’t see what’s ahead and how they can possibly adapt and live a full life with all of these hurdles,” says Diraddo. “We kept telling Jim, it’s a marathon, not a sprint. There will be a light at the end of this tunnel.” This hit home.

“I’ve completed 143 marathons, including 30 Boston Marathons,” says Jim. “So I could relate.”

The next phase: back to work and back to life

In summer 2018, Jim was discharged as an outpatient and transferred to Magee’s Day Rehabilitation Program, an intensive five-day a week regimen that includes all disciplines. Jim and Pauline had by then relocated to Philadelphia in an apartment close to the hospital. The Magee van transports Jim to the Riverfront Outpatient Center each day.

In Day Rehab, Jim would focus on his re-entry to a more independent life. His primary goal: getting back to work.

Jim elaborated, “Before the accident, I was very much involved in doing research on general relativity – big bang and black hole stuff. I had received a number of National Science Foundation grants to do my own research as well as to collaborate with others. The long road of rehab put all of this on hold. But now, I was anxious to get back to work.” 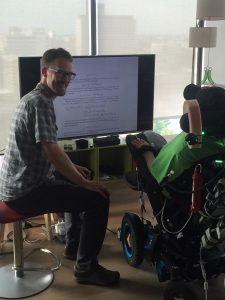 Jim and a colleague working on mathematics.

“Assistive technology played a key role in helping Jim return to writing and lecturing,” says speech therapist Sarah Lantz. Lantz worked with Jim to refine his use of Dragon Dictate, a voice activated software program that creates documents and presentations and utilizes email. This, combined with Glassouse, a pair of glasses fitted with a mouth-click device that allows the user to operate a computer mouse independently, helped Jim create a Power Point presentation. He has since lectured at the University of Miami, University of Pennsylvania, and at the Institute of Advanced Studies at Princeton. Jim has continued to refine his skills on Dragon Dictate with the help of Lucia Quinn at Inglis house.

At the same time, physical and occupational therapists in the Day Rehab program furthered his progress in the areas of sitting tolerance, posture, strength and neck control that started in the inpatient setting.

Physical therapist Andrew Stamatelos explains, “When Jim came to Day Rehab, he could only be upright for eight minutes prior to becoming orthostatic, a decrease in blood pressure that can cause someone to pass out. This is common for patients with SCI, as they no longer have the lower extremity movement and autonomic control to manage blood pressure.” Magee was one of the early rehab centers to test the Xcite, offering a newer version of functional electrical stimulation with higher parameters to help stimulate muscles previously unresponsive. This allowed Jim to build his upright tolerance to 40 minutes and eventually participate in locomotor training.

Occupational therapist Cate Furman got to work on power wheelchair mobility training with Jim and Pauline, including negotiating wheelchair accessible vehicles and navigating crowded environments. She also collaborated with speech therapy on voice-activated technology to increase the volume of Jim’s voice.

All of this hard work culminated with the Isenbergs traveling to Miami for Jim to deliver a professional presentation. The frontier-breaking journey involved driving to Virginia, then taking the auto train to Orlando. A homecare nurse accompanied them. Pauline relates that despite the long effort, it was all worth it to see Jim give a 60 minute speech at the University of Miami.

Both Jim and Pauline are grateful for the teaching and careful instruction of the therapy and nursing team to help them get to that point. 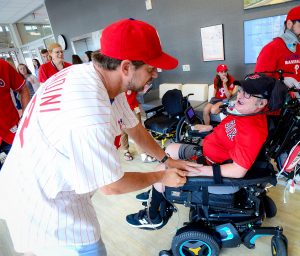 While return to work was a key objective, enjoying life together as a couple was the focus for Day Rehab recreational therapist Colleen McAllister. McAllister helped Jim and Pauline learn to navigate the city in a wheelchair.

“Jim and Pauline love museums and restaurants, so weekly outings focused on those two destinations. He also wanted to be able to attend a baseball game at Citizens Bank Park. We educated them both on accessible transportation (accessible Uber), navigating the ball park and managing respiration during such a long outing.” The outing was a success, despite their disappointment when the Red Sox lost.

Who says math can’t be romantic?

Jim and Pauline met in San Diego through a math and economics colleague. Pauline was in San Diego where she had completed her doctorate in economics. They’ve been married since 2016.

Jim describes Pauline’s role in his recovery as “crucial.” 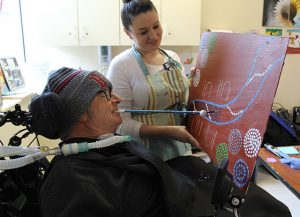 “She has given up so much to help me get to a better place,” he says. “I miss so many things, but I have so many things too. Pauline is a great cook! We enjoy eating out together and visiting the Barnes (Museum).”

Still, they often think of their 18-acre farm in Brownsville, Oregon. The miss their “kids” – the four-legged kind. This includes 14 goats, 12 sheep, 18 chickens and a llama. Fortunately, neighbors have stepped up to take care of things.

Today, Jim enjoys art therapy at Magee’s Riverfront Outpatient Center in South Philly as well as a storytelling workshop that is also a support group. He spends several hours a week in Magee’s Wellness Center.

“If this happened to me 20 years ago, I may not be alive,” recounts Jim. “If it happened in the future, I might have been cured, who knows? At this point, I’m grateful; thankful for Pauline, my therapy team and everything that I am still able to enjoy.”